After a long, uneventful day of driving on Wednesday, we arrived that evening at the Outer Banks of North Carolina.  I’d managed to find a decent deal on an oceanfront hotel room in Kill Devil Hills, almost directly across from the Wright Brothers National Memorial.  Thank God for off-season hotel rates!

Our first stop Thursday morning was a place called Duck Donuts.  Yes, the official story is that it was named after the nearby town of Duck, NC.  But I cannot resist trying out a place called Duck Donuts.  Especially when the store offers a t-shirt with a cartoon picture of a duck with a donut flying at his head that reads Duck!  Donuts!  Some of you may have stronger willpower than I do.  In any case, these were old-fashioned cake donuts, deep-fried and then offered with your choice of six different glazes.  I went for the regular sugar glaze while the kids opted for chocolate.  Man, they were good.  Crispy on the outside, chewy the center.  My cholesterol just went up 5 points by thinking about them.  Unfortunately, their coffee was more like Pennzoil.  I had to dump about 8 packets of sugar in it before it was drinkable, and that was their “medium” roast.  Win some, lose some. 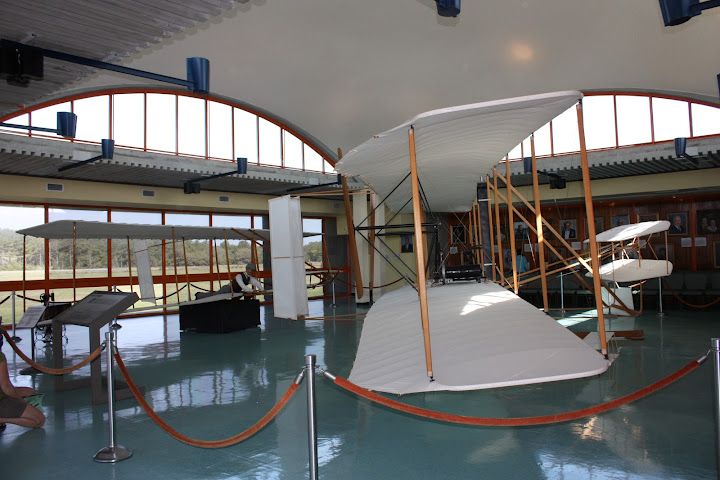 An exact replica of the Wright Flyer. Presumably this would fly, but sadly we didn't get to try.

We entered the Wright Brothers National Memorial soon after it opened and went inside.  This place is really well done.  In the visitor center, the rangers asked the kids if they wanted to do the Junior Ranger activities–basically filling out a worksheet where they gather answers to the questions from various places in the Memorial, and then requiring them to attend one ranger talk.  In return, they’d get a Junior Ranger patch.  We thought this was a good deal, and went with it.

The ranger talk was extremely good–a 20-minute re-telling of the Wright Brothers story.  Fascinating history.  My favorite character was a local from NC who was recruited to help with the plane’s launch.  He offered to take the famous picture of the first flight, having never operated a camera before.  They only had one shot at a photo.  When the time came, the historic first flight took place.  The brothers asked the man if he had gotten the photo, and in all the excitement, he said, “Uh…I don’t know.”  He couldn’t remember if he had tripped the shutter.  As it turned out, he did, and the photo is considered one of the greatest photos of all time.  He never took another one.

Later, that same guy was trying to help tie down the plane after it had taken 4 flights and the winds came up.  They struggled to hold it down, but finally the 600+ lb. weight was too much to handle, and everyone let go–except for our buddy, who went tumbling [rear end] over teakettle as the plane flipped over.  For the rest of his life, he told anyone who’d listen that he survived the world’s very first plane crash.

Outside, there is a monument to the Wright Brothers on Kill Devil Hill, as well as stone markers for the actual take-off spot and the 4 landing points.  There’s also an exact replica of the Wright Flyer inside the Visitor Center (the real one is in the Air & Space Museum in D.C.) and a Wright Flyer jungle gym outside for the kids to play on.  We’ll come back to that one later. 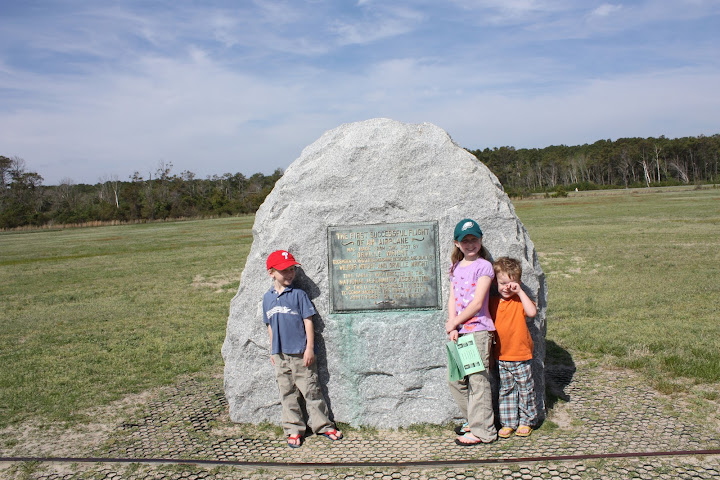 Stone marker at the spot where the first flight took off 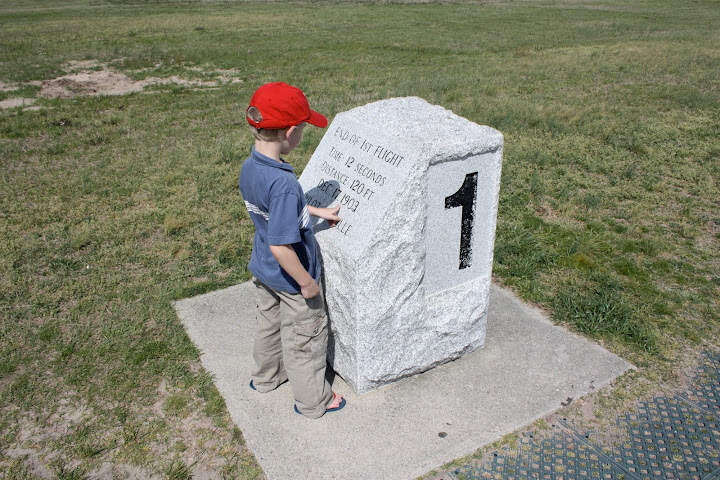 Big Dave reads the results of the first flight in history

The kids completed their tasks, said a pledge (that included a promise to clean their rooms), and got their Junior Ranger patches.  These were promptly lost once we returned home, probably under beds and desks in their pigpen rooms. 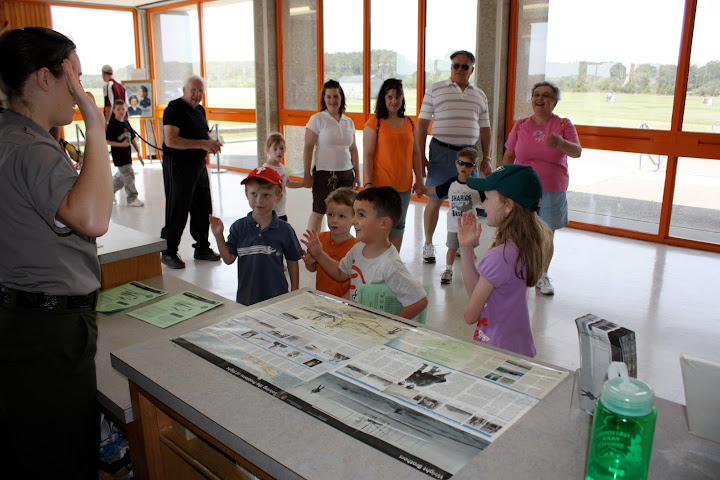 The kids promise to clean their rooms. They might as well have promised to cure cancer, too.

Next, we drove to Jockey Ridge State Park, home of the largest sand dune on the east coast.  You can freely climb all over it, so we took off our shoes and took advantage.  And boy, is it big.  At points, you could feel as though you were walking in the Sahara, although once you reached the top, the view of the ocean kind of spoiled that effect.  Great view, though. 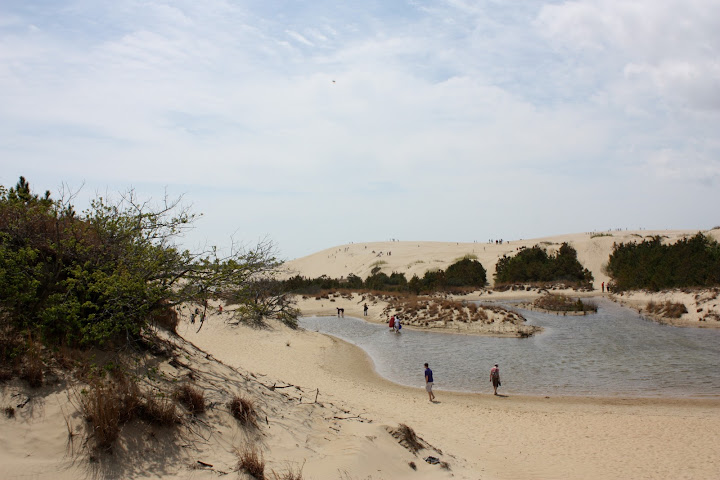 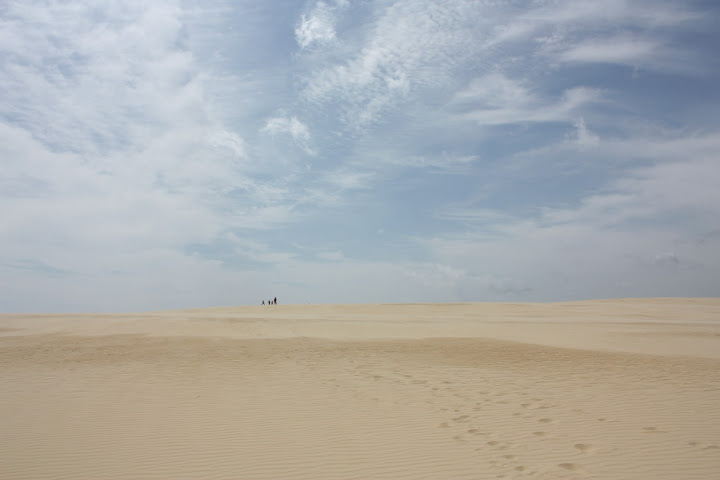 Those specks are me and the kids.

We had our daily PB&J ration in the parking lot (admittedly, I was starting to get sick of PB&J at this point) and drove down the way to Cape Hatteras National Seashore.  The plan was to drive down to the Bodie Island Lighthouse, just to see one of the famous lighthouses that dot the shoreline here.  The next closest one would have been at Cape Hatteras, 55 miles away.  That wasn’t going to happen.

As we drove, I saw what appeared to be a water tower in the distance.  I figured the lighthouse was beyond that somewhere.  Then, as we got closer, I saw what appeared to be scaffolding around the “water tower”, and got a sinking feeling in my stomach.  We found the turn for the lighthouse and my suspicions were correct: it was under renovation.  The top of the lighthouse had a large white enclosure around it that resembled a large roll of toilet paper.  So much for our dramatic, scenic pictures. 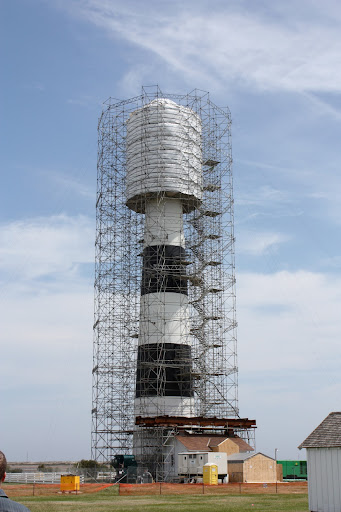 So we did the next best thing, which was visiting a cheap t-shirt outlet followed by mini-golf.  We chose Professor Hacker’s Treasure Hunt, since you could ride a “mine cart” (a trailer attached to a poorly-disguised riding lawnmower) to the Adventure Course.  Mini-golf with our kids is mostly herding cats, if the cats have been injected with liberal doses of sugar and caffeine.  Dave and Scotty like to barge 2 or 3 holes ahead, then run back, play a hole as fast as possible with no regard to score, and then run down the path again.  We spend our time yelling at them to get back here while attempting to putt juggling a putter, scorecard, pencil, and camera.  Then the kids start getting competitive with their scores, bragging about their good holes and making fun of their siblings’ struggles while we play peacemaker.  I had 2 holes-in-one, and Scotty announced that he needed to pee starting at the 15th hole.  Good old-fashioned family fun. 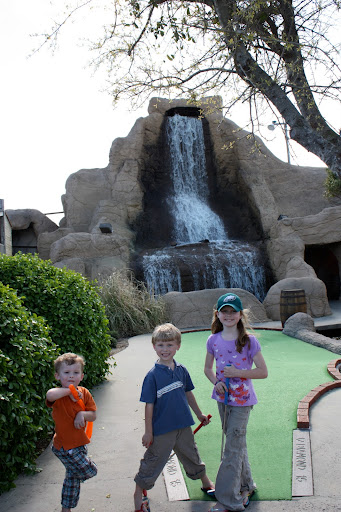 That's either Scotty's Heisman Trophy pose, or he really has to go.

Late in the afternoon we returned to the Memorial to let the kids play on the playground.  The Grumpy Ranger Lady in the ticket booth didn’t want to let us in, and resignedly announced that we only had 10 minutes, and they’d be closing at 4:45 p.m.  Look, Miss Grumpy Ranger Lady, the sign says you’re open till 5:00.  I don’t care if you’ve been sitting in this sweaty ticket booth all day and want to leave.  Buy a fan next time.  We went in anyway.

We parked and raced over to the jungle gym, determined to get our playtime in.  The kids had a blast climbing all over the Wright Flyer, while I amused myself taking stupid pictures with the statues scattered around.  You really shouldn’t let me have the camera.  Ever. 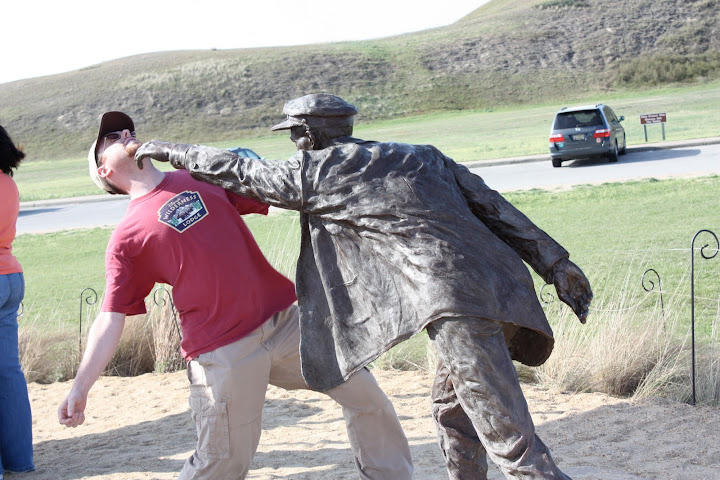 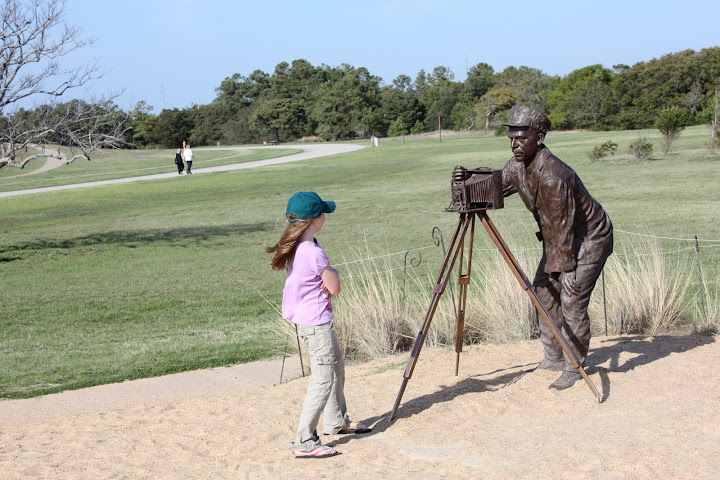 We got Sarah into the act as well. Here she's ready for her close-up.

Of course, my wife was encouraging me here.  Honest.  She’s the one who took the shots, after all.

We played for 15 minutes or so, thank you very much, and then piled into the van.  As we left, it was 4:52 p.m.  Grumpy Ranger Lady was placing traffic cones across the entrance.  I started encouraging the kids to wave and laugh at her as we passed, but this idea was shot down by my wife.  So I gave her the stink-eye instead.  I was getting good at that.

Dinner was at Pigman’s Barbecue, where we confirmed our opinion that Slow-barbecued pork = Awesome, Carolina vinegar-based sauce = Just OK.  Then, it was back to our hotel for an evening walking on the beach, watching the sunset, and trying to avoid the melancholy that comes with your last night of vacation freedom. 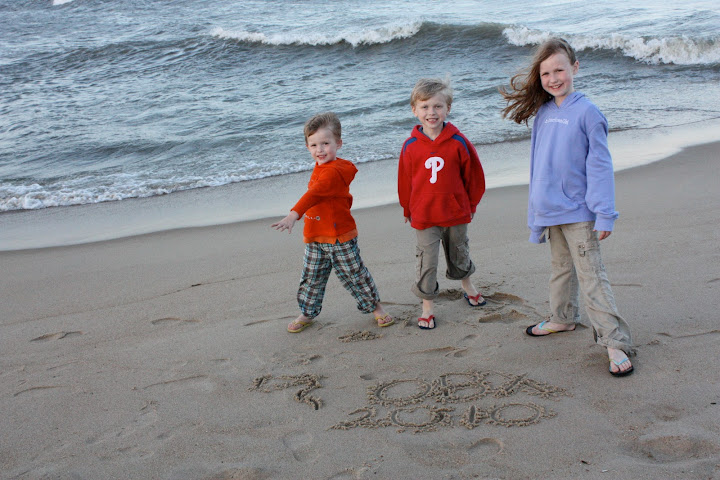 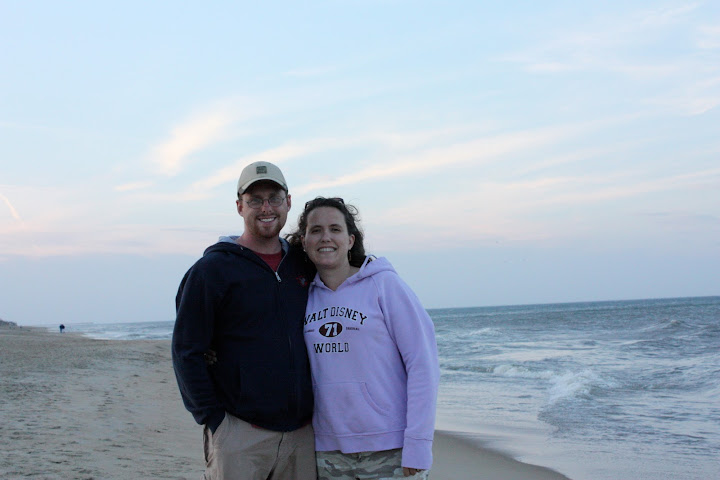 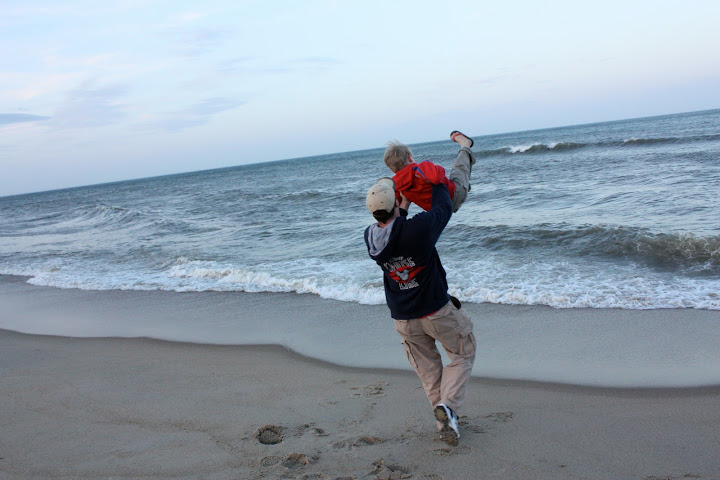 It's all fun and games till somebody gets thrown into the ocean.

Coming Up Next:  The return home, including an historic meeting of DIS Dads that was years in the making.  Either that, or I called him up last minute since we were driving through his hometown.  I forget. 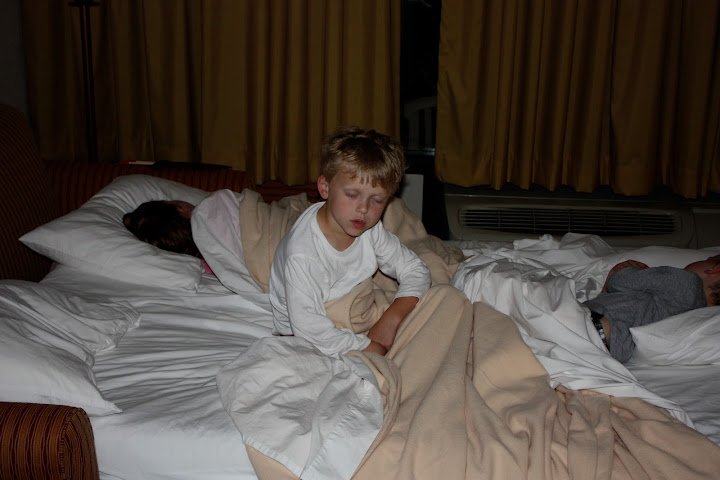 Dave at 10:30 p.m. He sat like this for a few minutes. I think this calls for a caption contest, for an OFFICIAL (tm) Captain Oblivious No-Prize.