While my parents and my other brother Rob were headed to the Masters on Tuesday, we had planned to spend the day in Charleston.  But you know what they say about the best-laid plans.

I’m an obsessive vacation planner.  Half the fun for me is in the planning and the anticipation of the vacation, in trying to see as much as we can without killing ourselves.  I love being able to make the decisions and run the show.

But that can also result in a trip that’s so planned out that it loses some spontaneity, which is also part of the fun.  So, we try and plan the major beats of the day and then leave time for improvisation.  And on this day, the fact of the matter was that we were all sick of driving, and the idea of 2 hours down and 2 hours back from Charleston did not sound appealing (especially with another big driving day looming on Wednesday).  So, we called an audible and stuck around Columbia for the day.  We’ll have to save Fort Sumter for a future trip. 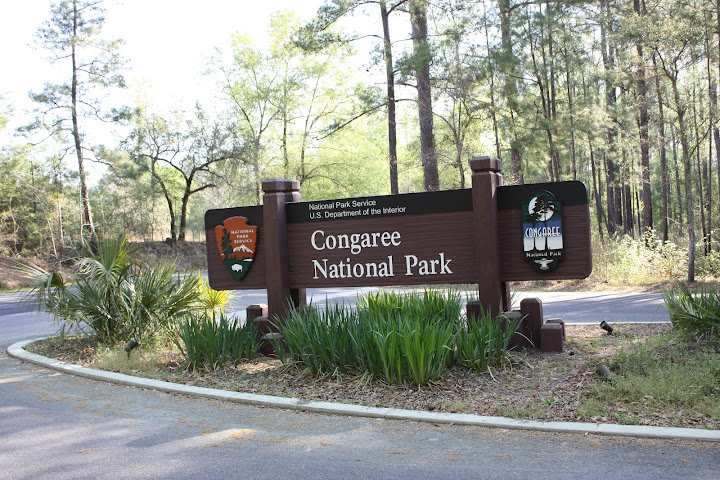 Congaree National Park. But I guess you knew that.

Our first stop was one of the country’s newest National Parks: Congaree.  This is a large cypress swamp that was first designated as a national monument in 1976 and then upgraded to a National Park in 2003.  According to Wikipedia, it “preserves the largest tract of old growth bottomland hardwood forest left in the United States.  I will award $1,000  a Captain Oblivious No-Prize to the first person who can explain in layman’s terms what that means.

*Note: I am shamelessly ripping off Barry’s gag of awarding fake prizes in trip reports, mostly because I couldn’t come up with anything better.  If you’re going to steal, steal from the best. 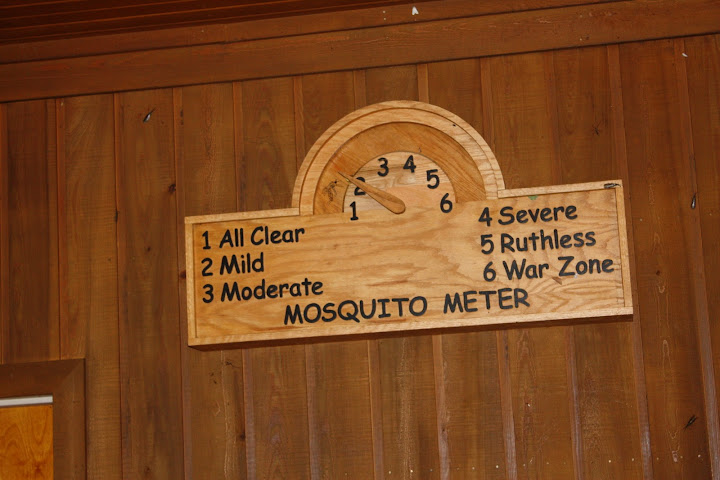 I love this sign. I want to find one for my deck.

In any case, the park is mostly undisturbed swampland, with a 2-mile boardwalk trail that loops from the visitor center around various tracts of some of the largest cypress trees in the Eastern U.S. 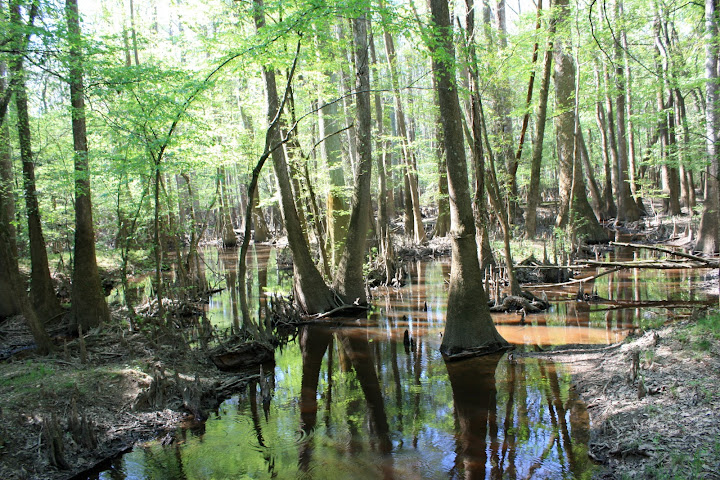 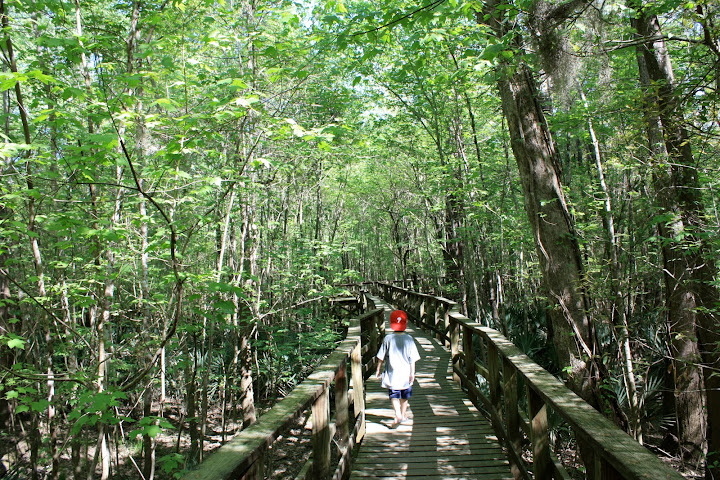 We took the trail, and the kids held up pretty well throughout.  This means that Scotty made it almost halfway through before demanding that we carry him.  We didn’t get to see much wildlife, although woodpeckers were making noise all around us.  I spotted one on a tree, but it flew away before I could point it out to the rest of the family. 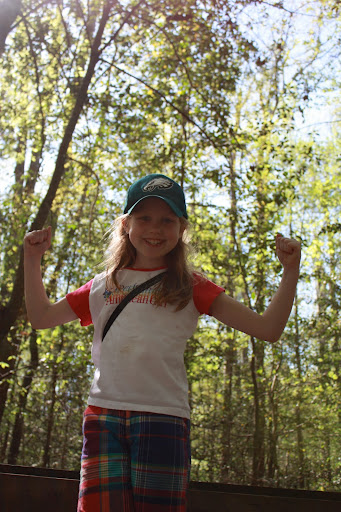 The kids were pretty proud of themselves.

The hike took most of the morning, which was about all we needed to see of the swamp.  From here it was on to the Columbia Children’s Museum, called Edventure.  I have no idea why, and will award $5,000 a shiny new nickel to anyone who does.  (Note: the $0.05 will come in the form of an indefinite IOU).

After PB&J in the parking lot, we entered the museum. 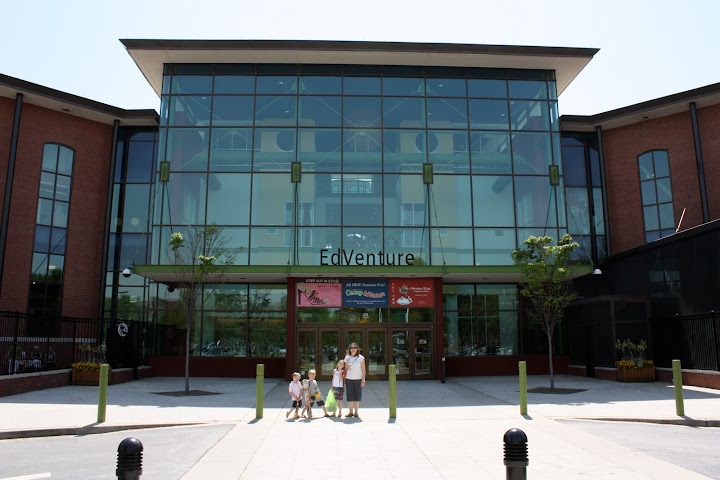 Time for my mini-rant: why do “Children’s Museums” across the country charge the adults full price to get in?   This drives me crazy every time.  All I’m going to do in there is sit on a bench and watch the kids.  That’s it.  I have no interest in pretending to milk a cow or shop in a fake grocery store.  I might want to slide down the fireman pole, but the security guy in the last museum I visited said that was a no-no.

Anyway, the kids wanted to go in, so I forked over my money.  But I made sure to give the clerk the stink-eye while I did so.  So there.

The main attraction at Edventure is Eddie, a 3-story sculpture of a child whose insides double as a playground that shows kids the various systems in the body.  For example, the stomach area contained large foam representations of ice cream sandiches.  Curiously, there was a slide leading out of the stomach to the floor behind the figure.  Every time a kid slid down, the figure made a gassy, gurgling sound, and then out would come the kid.  I found no end of amusement in this.  “It’s crapping out kids!” I declared to my wife.  She smacked me in the gut and told me to go sit on a bench.

The kids had a great time.  There was a farm area, a firehouse, grocery store, car repair garage, African village, music and TV studios, and a water play area outside.  At least they got their money’s worth. David, our most cautious child, walked around for the first half with his hands covering his ears, as though he was afraid something would be loud. I’m guessing he may not want to do the Dinosaur ride in Disney World this fall. 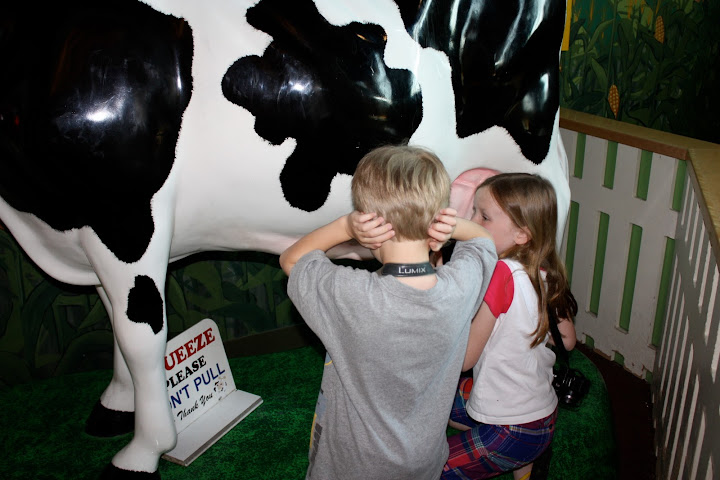 Dave was ready in case the cow moo-ed extra loud. 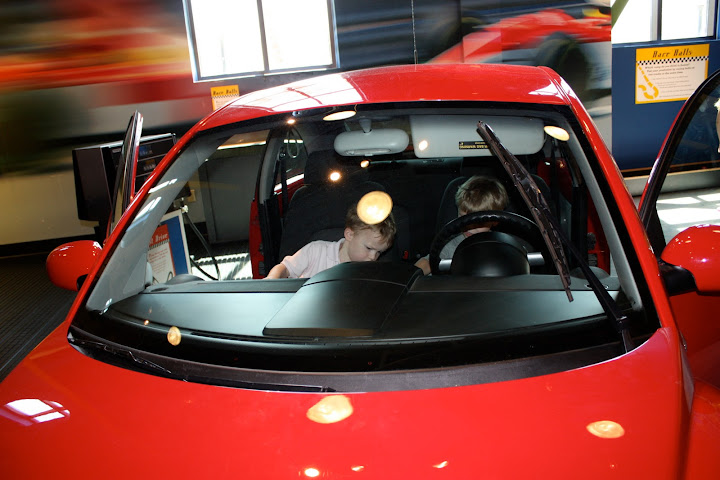 As a dad, this just scares me. 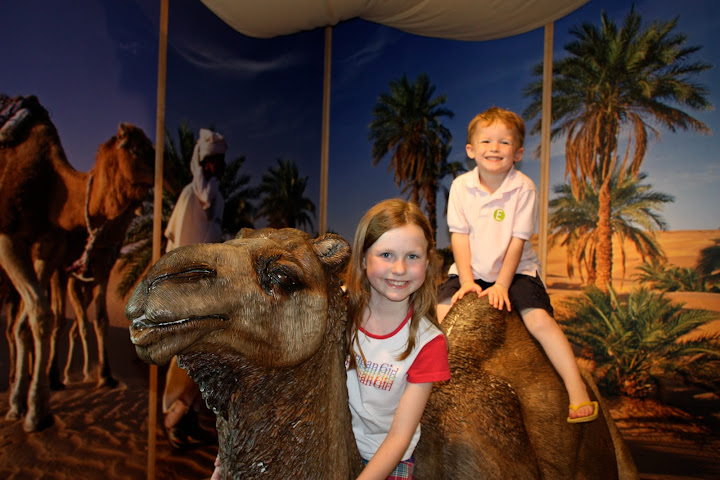 I don't imagine this would be a comfortable ride for Scotty. 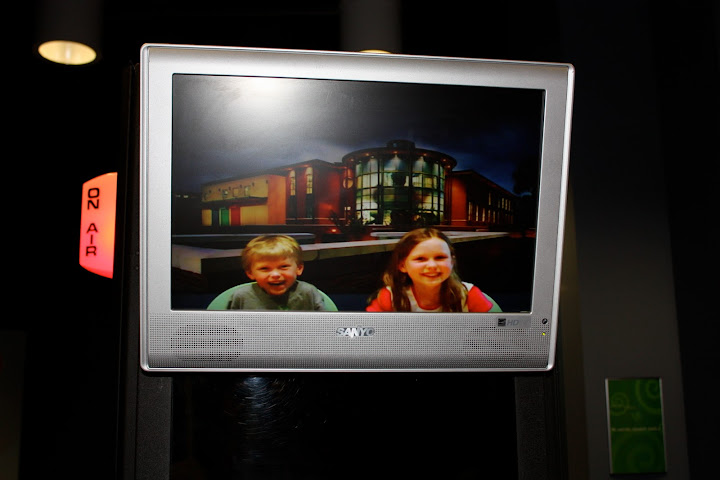 I'm just glad they were having a blast.

For dinner, we found a nice local chain called the Copper River Grill which had a pretty decent BBQ bacon cheeseburger, among other things.  I only mention this because after the local BBQ place the night before, my brothers and their wives asked my parents to eat at the fanciest place in town that evening.  When they returned to the hotel that night, I asked my dad how dinner was.  He gave me a dirty look and said, “Mom and I just had a soup and salad.  It was $45.”  If looks could kill…

I’ll skip over Wednesday, since it was all driving up to the Outer Banks in North Carolina.  But I can say that it confirmed our decision not to do Charleston on Tuesday.  We needed that break!

Coming Up Next: A day in the Outer Banks, complete with a little history, a little mini-golf, a little sand, and a giant roll of toilet paper.  And maybe I’ll even stop stealing Barry’s gag.