Welcome to the heavy-driving portion of our trip.  Please keep your arms and legs inside the vehicle at all times.  Por favor mantenganse alejado de las puertas.

Saturday started off in relaxed fashion, as my aunt held a mini-Easter Egg hunt for the kids around her yard.  I moved quickly to hide the eggs so we could do the hunt and then get moving on our drive.  I can’t tell you how excited I was to get lots of chocolate candy to keep in the hot, stuffy van on a long road trip.  The kids loved it, of course, and Sarah impressed me by finding the one I had concealed in the bird feeder. 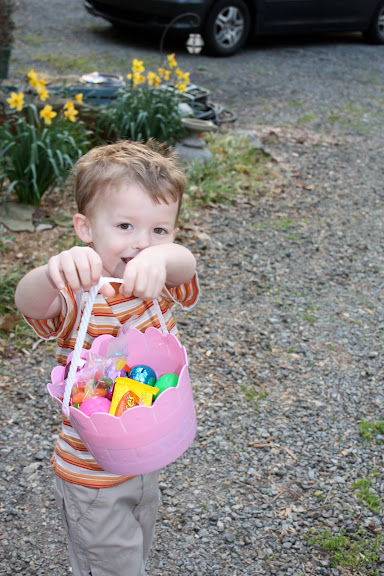 Scotty shows off his bounty.

We packed up the van and got ready to leave.  As I climbed in to start the van, I noticed a red light blinking on the dashboard.  Hmmm…wonder what that is.  I started the van, and the car alarm immediately started blasting the horn.  For some reason, the security system hadn’t disabled itself when I had unlocked the van.  I tried pushing the alarm button on the remote, turning the car on and off, unlocking the doors again…nothing worked.  For a full two minutes, we serenaded the neighbors, our car alarm echoing through the valley.  My uncle came out and made a motion to turn the ignition with his hands, his look clearly saying, “Hey, moron, turn the car off.”  “I already tried that!”, I said.  The kids giggled at me from the back seat through the entire ordeal.  Finally, we turned it off,  locked the doors, then unlocked them again.  That seemed to re-set the system.  Oy.

Finally, we set out and entered the Blue Ridge Parkway. 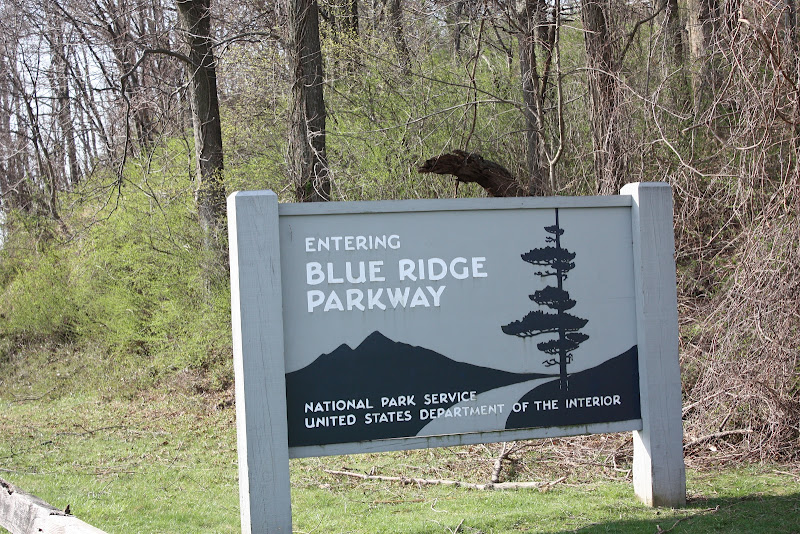 Have you noticed we like to take pictures of signs to mark our journey? 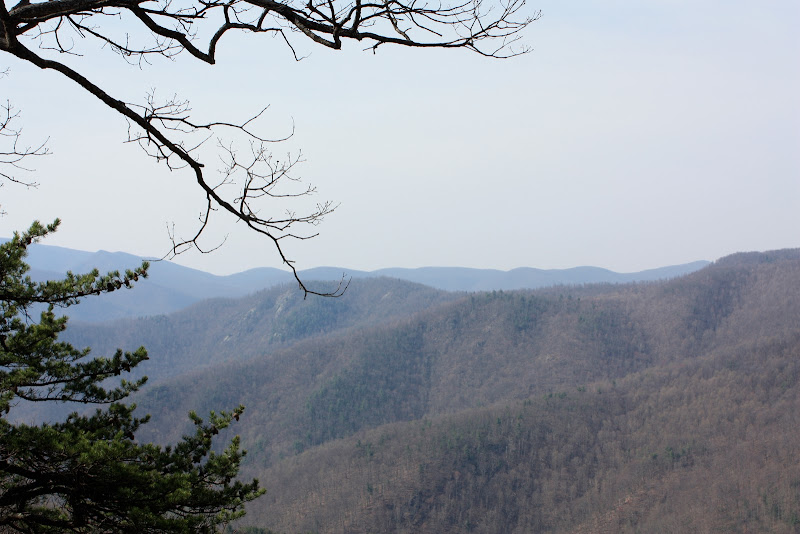 This is a 457-mile two-lane road that connects Shenandoah National Park with Great Smoky Mountains National Park, traversing the Blue Ridge Mountains the whole way.  Our plan had been to drive the first 100 miles or so to Roanoake before jumping over to the interstate to get to my Uncle Bill’s house in Abingdon, VA.

The drive was very similar to Shenandoah: 35 mph, lots of twists and turns and random guardrails with deadly drops unprotected.  We also saw a couple of “overlooks” where huge trees blocked any chance at a view.  Not sure what the point was there.  We saw yet another one of these and started to drive on past, when we noticed a big waterfall up the slope.  Aha!  So that’s why that parking lot was there.  I successfully performed a 27-point turn and pulled into the lot. 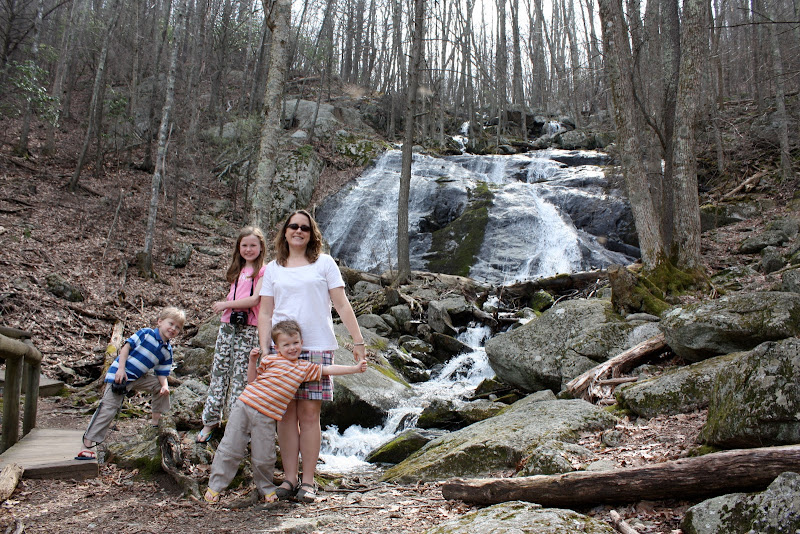 I'm a sucker for waterfalls.

Lunch was at the bridge over the James River.  We’d gone about 85 miles on the BRP at this point and everyone felt like they’d had enough mountain driving for the day.  So, we had our PBJ and cheese balls and took a walk.  They had a cool little pedestrian bridge under the main road bridge that led to the river’s shores and a restored lock from a canal.  Great little spot for a break. 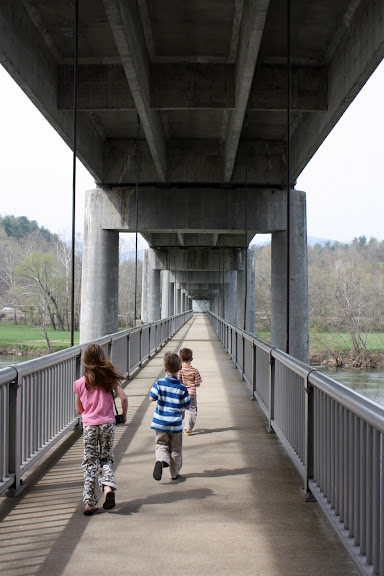 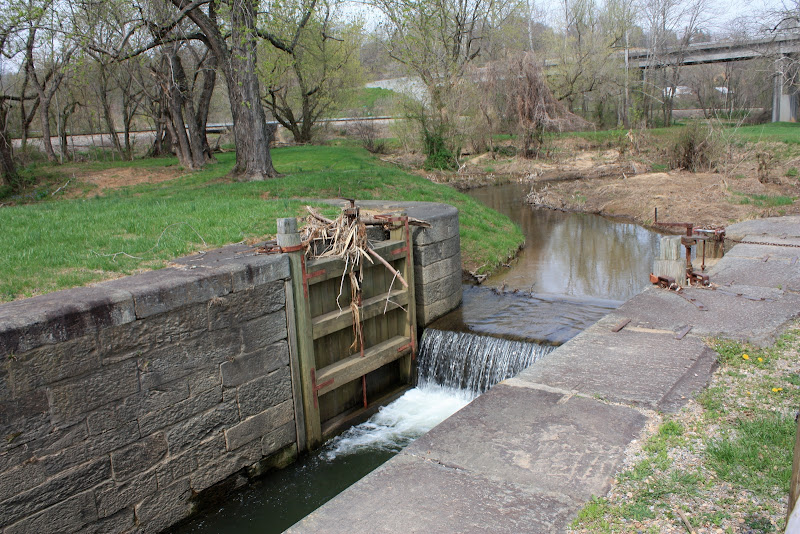 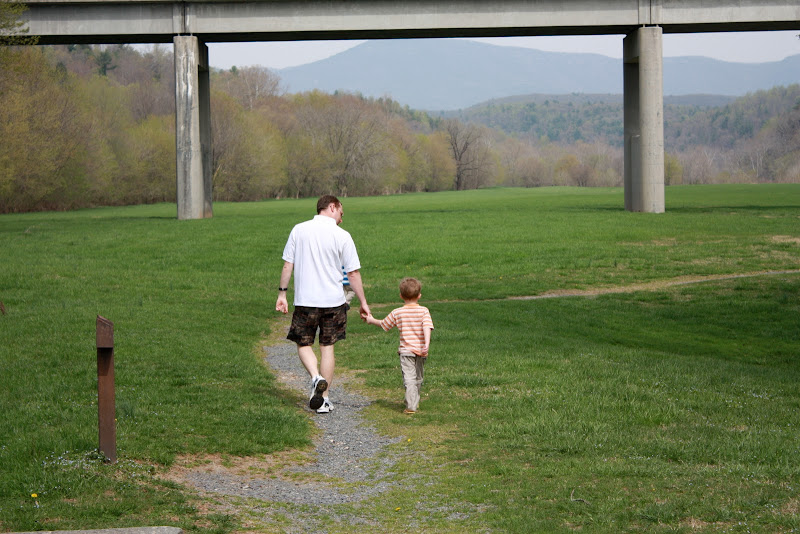 After jumping on I-81, we drove 2.5 hours to my uncle’s place.  You don’t realize how big Virginia really is until you have to drive to Abingdon, way down in the SW corner of the state.  Here, we met up with my parents and relatives to celebrate Easter with a nice dinner, a church service in the morning, and of course, a huge bonfire.

My uncle likes to save his Christmas tree, get it nice and dry, and then burn it to mark the beginning of spring.  Here’s the fire before we put the tree in… 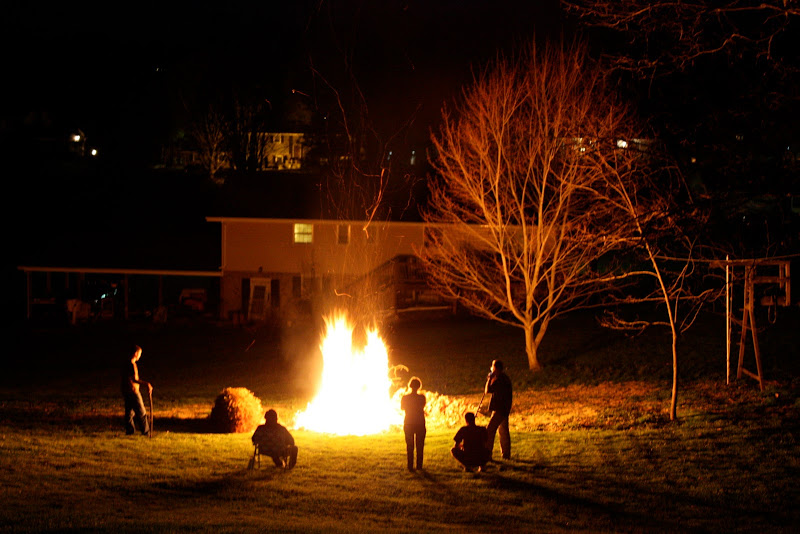 And after.  That tree had been sitting for 3 months, and it went up fast.  We’re talking a Biblical pillar of fire here.  If that doesn’t scream “Awesome!” to you, then I really can’t help you. 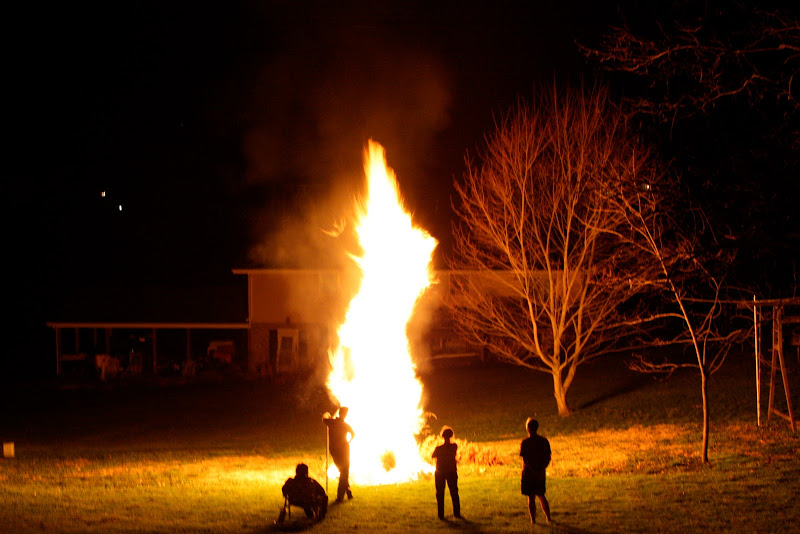 Contrary to reports, the other homes, trees and yards in the picture were not harmed.

Sunday was the Easter service (Julie made me pack a coat and tie for this–ugh!) and then 5.5 hours of driving down to Columbia, SC.  DVD showings for the day included Wall-E and 101 Dalmatians.  We drove into Tennessee first. 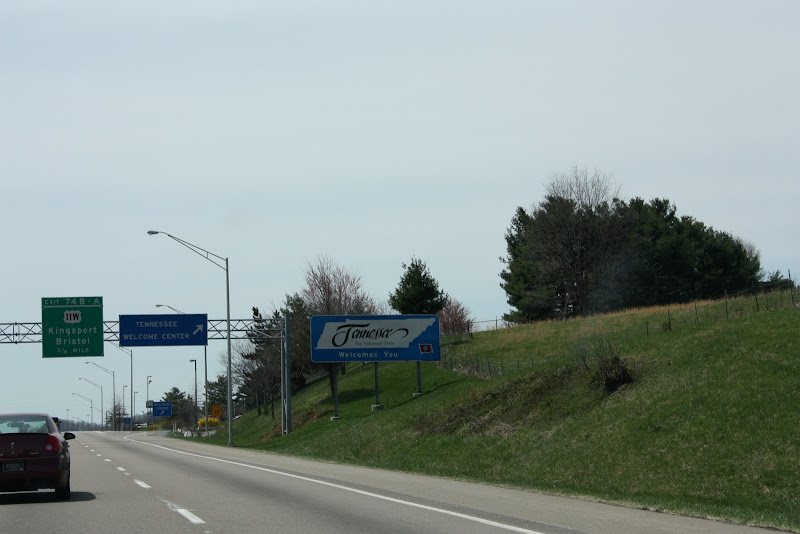 I drove past Trennr’s office in Johnson City.  Given that it was Easter Sunday, I figured he had better things to do than try and catch me passing through, but I did unleash my best wave in his direction.  Trennr reported later that the sheer seismic force of this wave knocked Chuck off of his keyboard in his office.  We passed through North Carolina and South Carolina in short order. 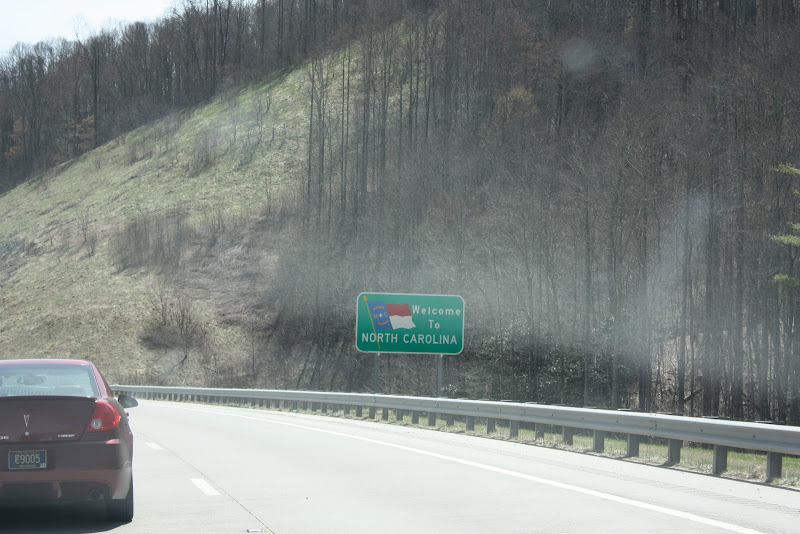 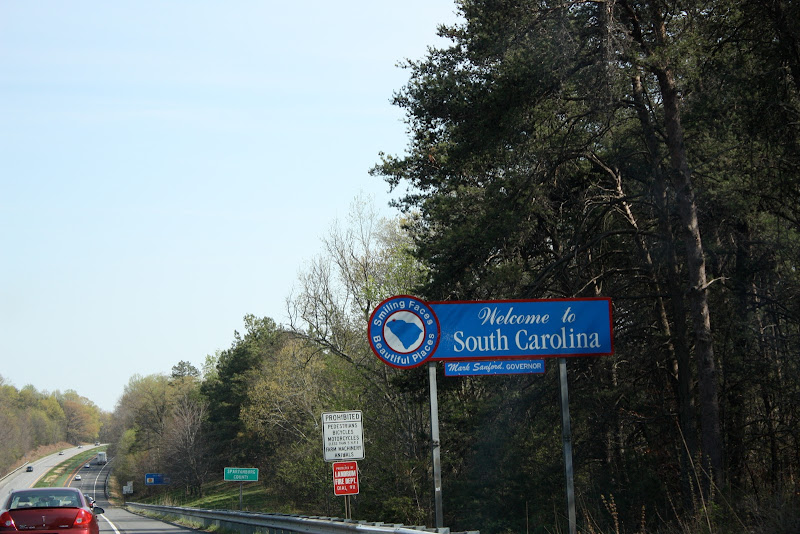 State Line #5. Can't get enough of these pictures, can you?

I was following my dad the whole way.  His speed ranged from about 48-75 mph, which made following him…well, let’s say “difficult”.  But we survived and pulled into our hotel right around dinner time.  It was located on “Harbison Blvd.”  Dave couldn’t believe that nobody in South Carolina could spell our name correctly.

One final story.  At dinner that night, I was fooling around with my iPod on the wireless connection, and said to the table, “Wow…the Eagles traded McNabb to the Redskins.”  My dad looked at me like I had sprouted antennae.  I let the family twist a little before I revealed that I was just kidding.  After all, nobody would be stupid enough to trade a franchise QB to a division rival.

Two hours later, the news popped up on ESPN: Eagles Trade McNabb To Redskins.  My jaw dropped, and I knocked on my dad’s door to tell him.  “Yeah, right…” he said.  I had to get him to turn on the TV to confirm it.  True story.

Coming Up Next: A day on hallowed ground…Augusta National Golf Club.  Followed by dinner in Nowhere, SC.