Getting up at the crack of dawn for an 8-hour drive is a lot easier when you’re leaving home for a vacation than vice versa.  Somehow, we roused ourselves out of bed, got dressed, packed up, and felt a little better after coffee and apple-cider donuts.  Oh, didn’t I mention the apple-cider donuts before?  We stopped at a farm the previous day in Vermont and bought some hot out of the fryer.  This is known as a win.

Then we locked up the cabin, piled into the van, and started our all-day drive home.  This is known as…less of a win.

Actually I really don’t mind long drives.  I enjoy seeing the country.  More importantly, our portable DVD player still works, so that reduces the “Are we there yet?” questions from the back seat.

We drove uneventfully down I-91 through Vermont and Massachusetts.  Not a whole lot of note happened.  We did pass the Basketball Hall of Fame in Springfield, MA, which is visible from the interstate and looks like an architect went to EPCOT, saw Spaceship Earth and thought: hey, we could use that!  But it needs a building around it.  See it here.

The other adventure involved Pit Stop Roulette.  This is that most dreaded of road trip games in which your child announces he/she needs to use the potty, and you begin to scour the blue signs near every exit looking for the next available bathroom.  Typically, you can find a McDonalds or something right off the exit and not lose too much time.  But every once in a while, you come up with a poor roll.  You see the McDonalds on the blue sign, take the exit, follow the arrows…and keep going…and going…and going…

Pretty soon, you’re miles away from the exit and wondering if you should turn around and get back on the interstate or keep going.  It has to be around the next corner, doesn’t it?

Anyway, we got off the interstate at Holyoke, MA.  We chose…poorly.  The exit promised a McDonalds, but emptied us out into a residential neighborhood instead.  Not a single public building in sight.  By the time we actually found the McDonalds, everyone had to go, so hopefully what we lost in driving time we made up for in efficiency.

No matter.  We were still on track for an important lunchtime event: a DIS Dads Meet!  I’d contacted a couple of our Connecticut Dads before I left: Chris (DisDadDoc) and Tim (That’s Nice).  Chris was nice enough to offer to have us meet up for lunch at his place.  Tim would be trying to come along later after picking his daughter up from school.  We got to Chris’ place just after noon.  Unfortunately, his kids were at school and we didn’t get to meet them, but we did meet his lovely wife Eileen.  They greeted us as though they’d known us for years (the wonders of living in the internet age).  Then they made the classic blunder (no, not getting involved in a land war in Asia): they invited us into their home.

My kids were shy at first, but they warmed up soon enough under the glow of Chris’ massive 284-inch big-screen TV (size approximate).  They made themselves right at home, and hopefully Chris hasn’t discovered all the drinks they spilled under his couch yet.  Meanwhile, burgers, dogs and brats were soon on the grill and we were having a blast.    Chris and Eileen are intelligent, kind and have a great sense of humor.  The conversation was easy and fun.

Along with the burgers, Chris sliced up some fresh green and red things he called “lettuce” and “tomatoes”.  Since my diet has never progressed beyond that of an 8-year-old, I’d never seen them before, but Chris seemed to enjoy them well enough.  Tim called to let us know he’d picked up his daughter and was on his way.  I was nervous about making it around New York City before rush hour, but how could I miss out on a DIS Dad meet?  Soon Tim was there and we were able to fully document this historic event. 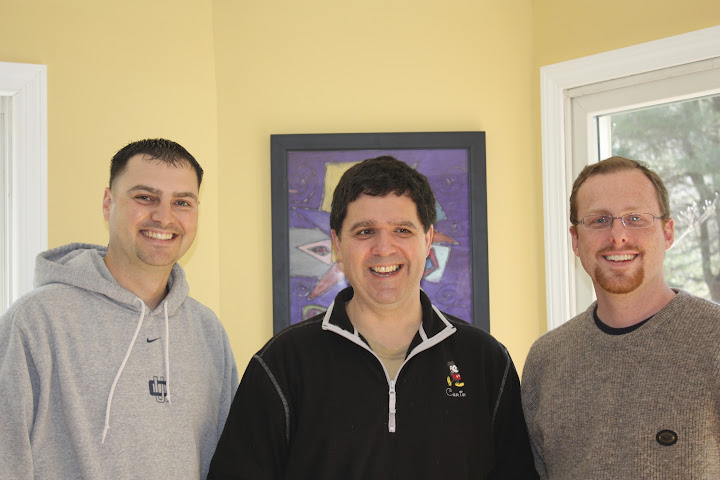 I was excited to be able to meet Tim and his daughter, Juliana, who is a bit of a celebrity on the DIS boards.  She went through a lot early on in life, and if you don’t know her full story, I encourage you to catch up with Tim’s trip reports on the DIS Boards.  It’s worth your time.

Chris, Tim and their families are terrific people.  It was more confirmation that the DIS Dads Club is made up of truly special people.  We almost wished we lived in Connecticut, so we could hang out with these guys more often.

I guess we’ll have to coordinate some WDW trips instead…

I’d tell you about the drive home from there, but it was really boring and uneventful.  Just imagine your favorite car chase from the movies instead.

Thank you to everyone who followed along!  I enjoyed re-living the vacation and I hope you enjoyed reading about it.  Either that, or you’re relieved it’s over.  Whatever the case may be, thanks for enduring!