We headed south from Stowe after lunch, with no real plan for the rest of the day.  Not that this was a bad thing.  I know, we all have our spreadsheets and touring plans and lists of attractions that we’ve researched for 2 years on end…and believe me, I did plenty of research on this trip myself.  But sometimes it’s nice to wander and feel the freedom to stop and check out whatever strikes your fancy.  If the kids can time these stops to take their bathroom breaks, all the better.

With that in mind, we took the opportunity to immerse our kids in the art and culture of Vermont: 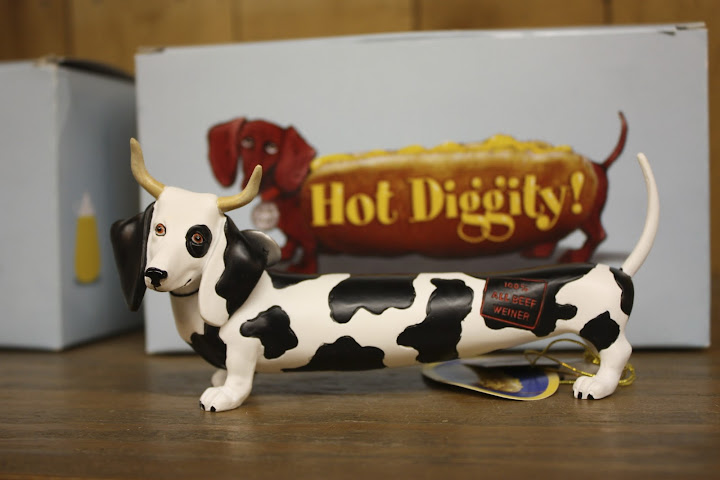 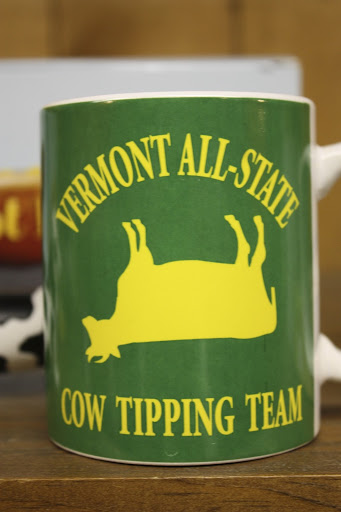 Almost as prestigious as the All-Madden Team. 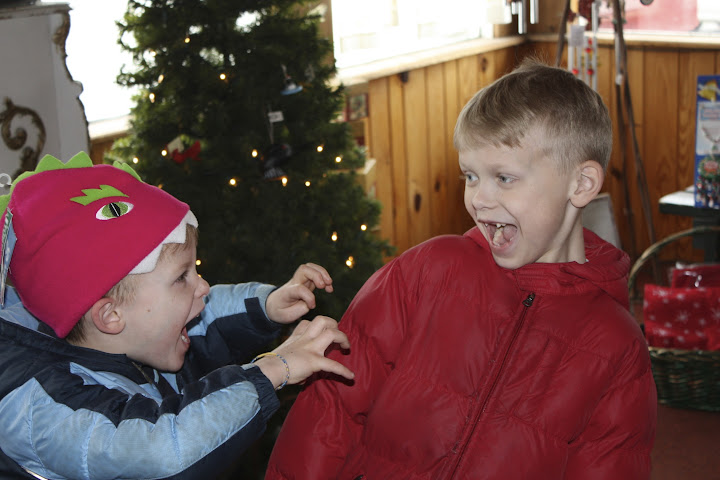 Anytime you find a pink monster hat, you have to do this.

After picking up some bona-fide Vermont maple syrup, we pulled into a glassblower studio.  It was “live” that day, meaning we’d be able to watch him work.  The studio was full of unprotected and expensive vases, jars, drinking glasses, pitchers, and artistic scupltures in a myriad of colors.  We had 3 unrestrained kids under the age of 10.  What could possibly go wrong? 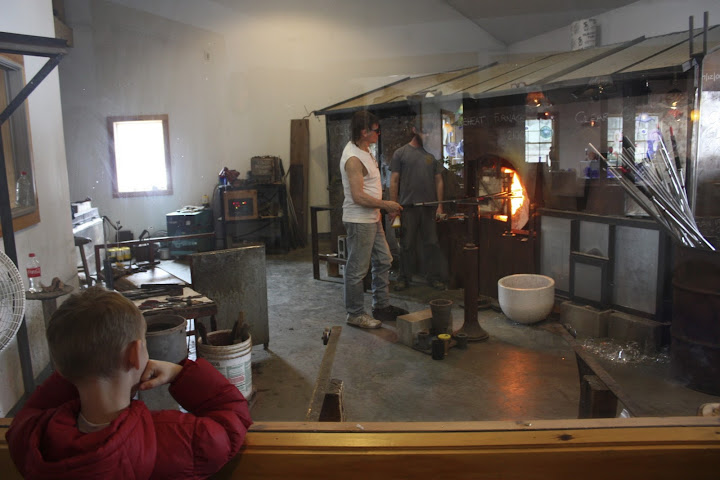 Actually, the kids did great.  They were fascinated watching the glassblower work.  He was creating some drinking glasses that day, with some cool glass swirls added to the outside of the glass: 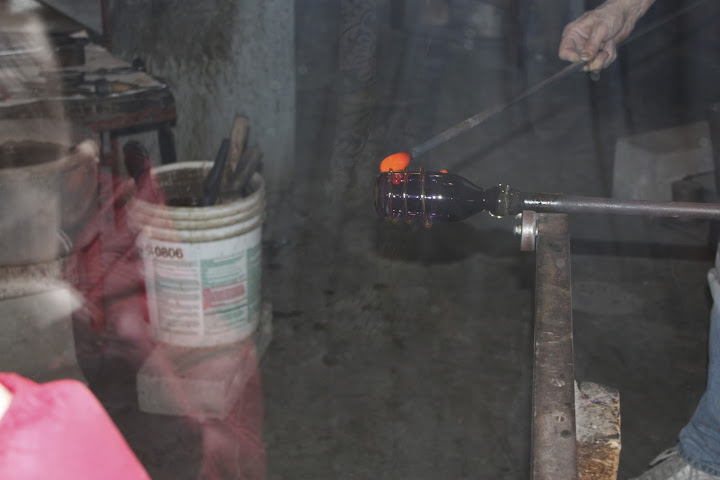 Somehow, we managed to leave without buying and/or breaking anything and headed back into Waterbury.  A visitor’s guide said the Green Mountain Coffee Co. had a visitor center in town, so we made a spur-of-the-moment decision to try and find it.  Normally, this would result in 3 hours of blind driving through town with our luck, but we actually didn’t have much trouble.  The Coffee Co. had set up shop inside an old train station. 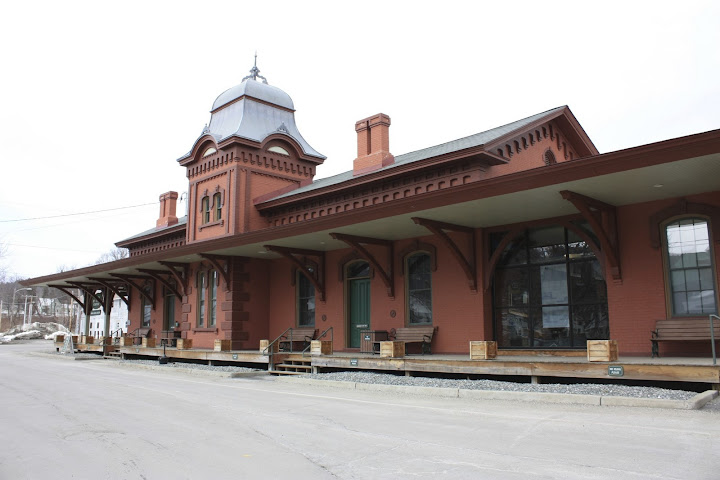 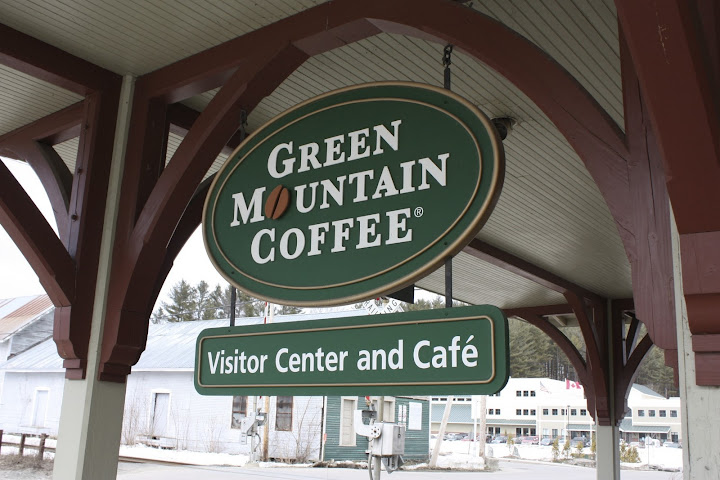 Inside were a few short exhibits concerning how coffee is harvested and made followed by a cafe.  Or at least, I think that’s what was in there.  Scotty immediately announced that he had to go potty, and I took him to take care of business.  By the time he was done, the rest of the family had finished walking through, so I didn’t really get to see anything.  Apparently the kids had enough time to do some bean harvesting of their own: 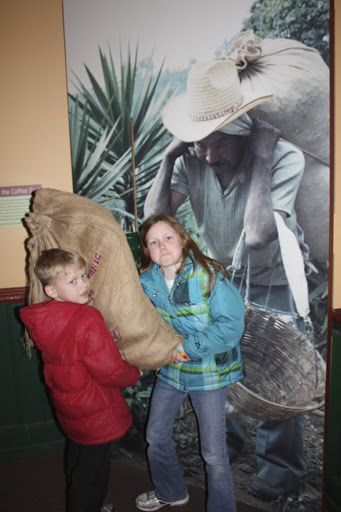 I hope Scotty's not in there.

We browsed the cafe, which included many flavors we hadn’t heard of or tried before.  Julie had gotten a Keurig coffee brewer for Christmas and found several varieties she wanted to try, including a Kahlua-flavored coffee.  But she didn’t want to buy 18 cups of it, just in case she didn’t like it.  So she asked the lady at the counter if they had a sampler box.  It turned out they didn’t, but the woman went to the display, grabbed a few cups, and put them in a bag.  Free samples!  See, it never hurts to ask.

We wound our way back to the cabin in New Hampshire and spent some time relaxing and playing board games.  Some of the games there needed some batteries in order to play properly, but my kids weren’t too concerned with following all of the rules.  Therefore, neither were we.  Soon, it was time for dinner.  We set out in the Advanced Exploration Vehicle, with some stops to see some scenic covered bridges along the way. 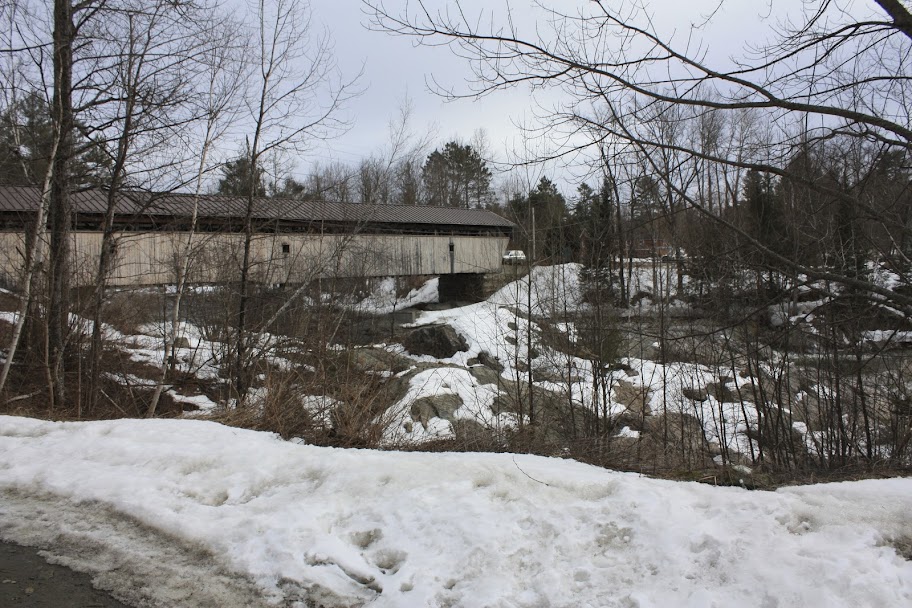 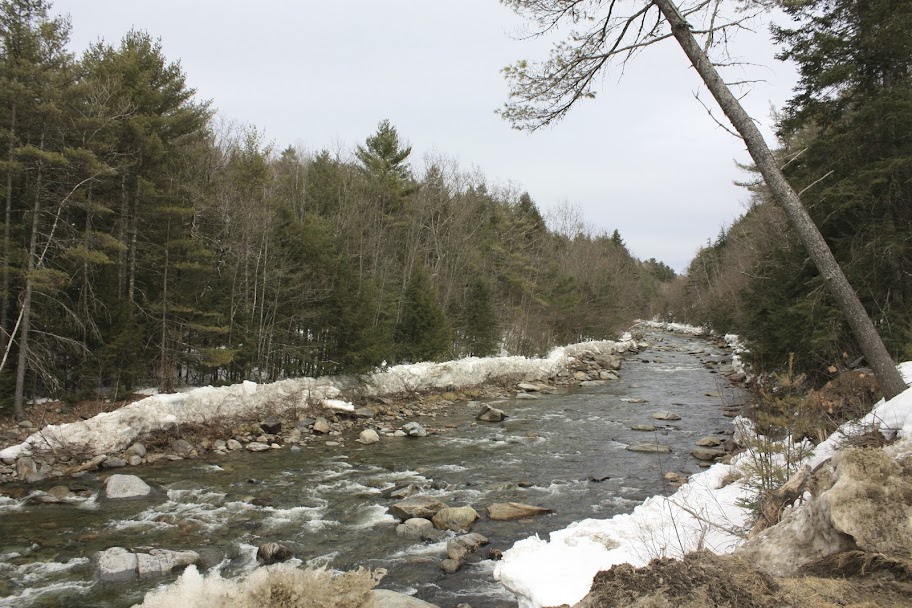 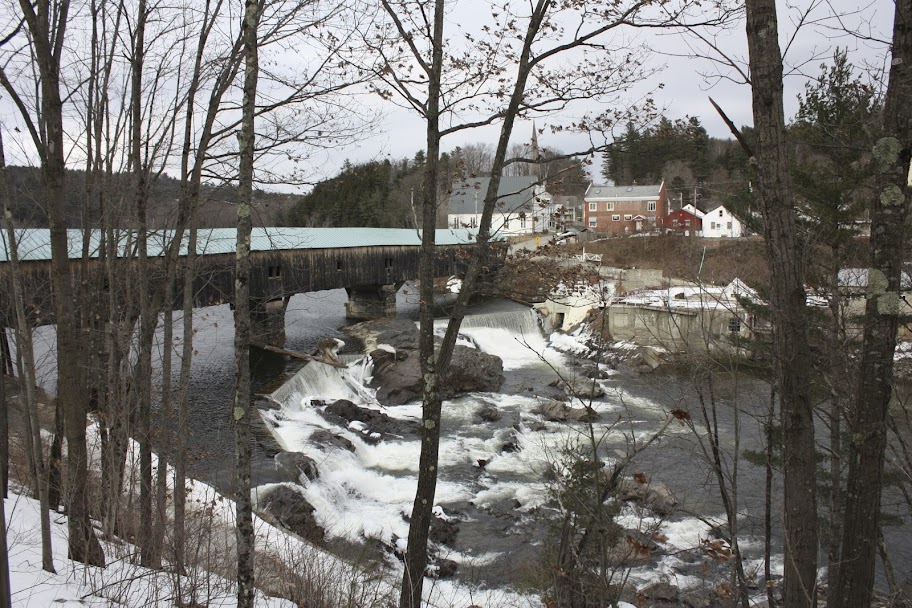 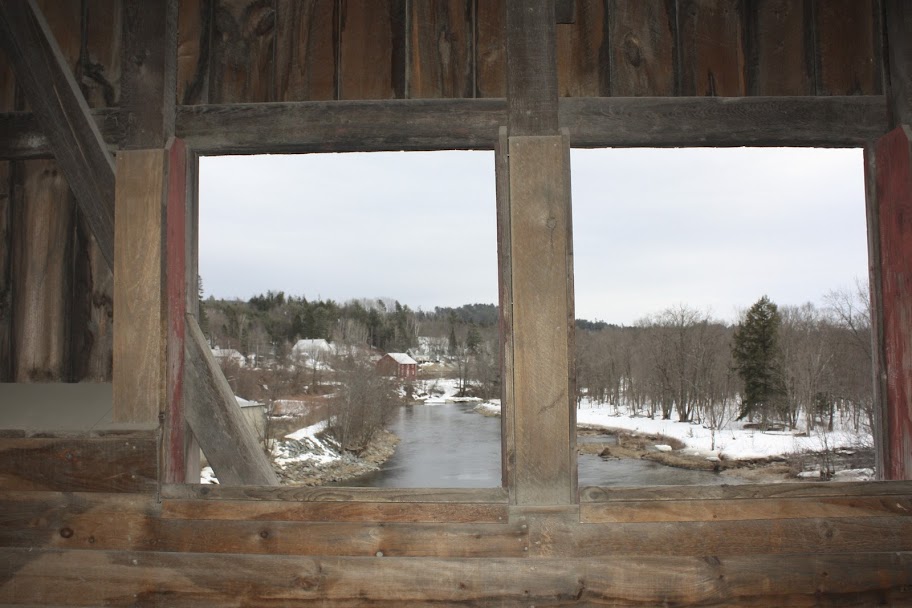 We also stopped in the tiny town of Bath, NH to see the country’s oldest continuously-operating general store: The Brick Store.  I assume it is called that because it’s made of brick, and colonial settlers maybe weren’t very original. 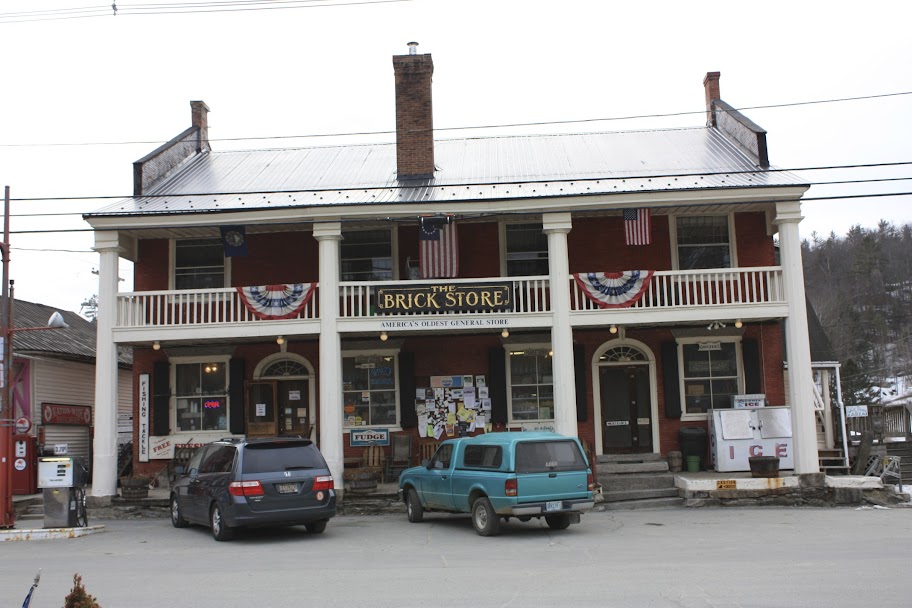 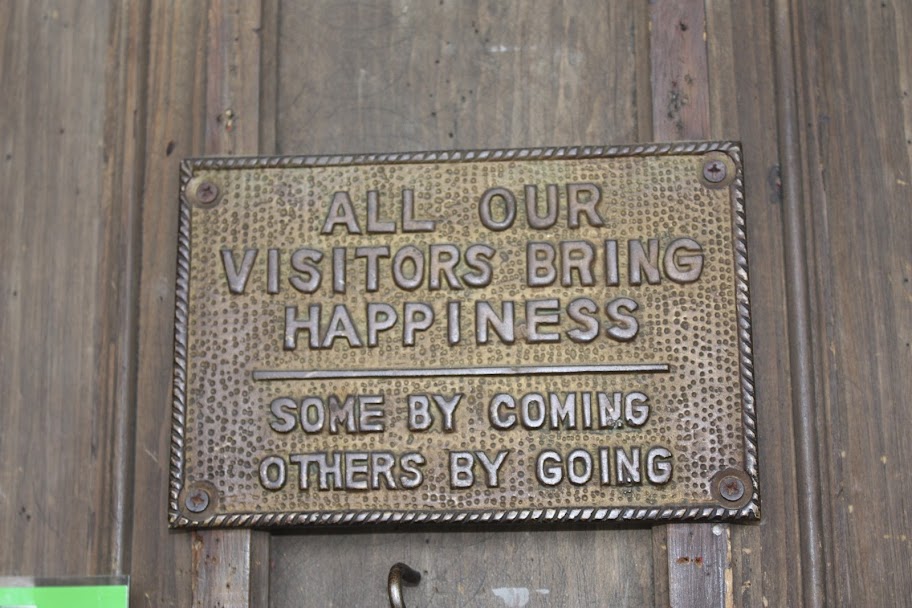 Not sure which category we fell into.

Upon entering, I immediately knew the reason they had stayed in business for well over 200 years.  THE ENTIRE STORE SMELLED LIKE SMOKED BACON.  It’s such a simple, ingenious business plan that I don’t know why I didn’t think of it sooner.  There’s no way any man can resist that smell upon entering.  For the women, they offered free samples of fudge.  Again…simple, and ingenious. 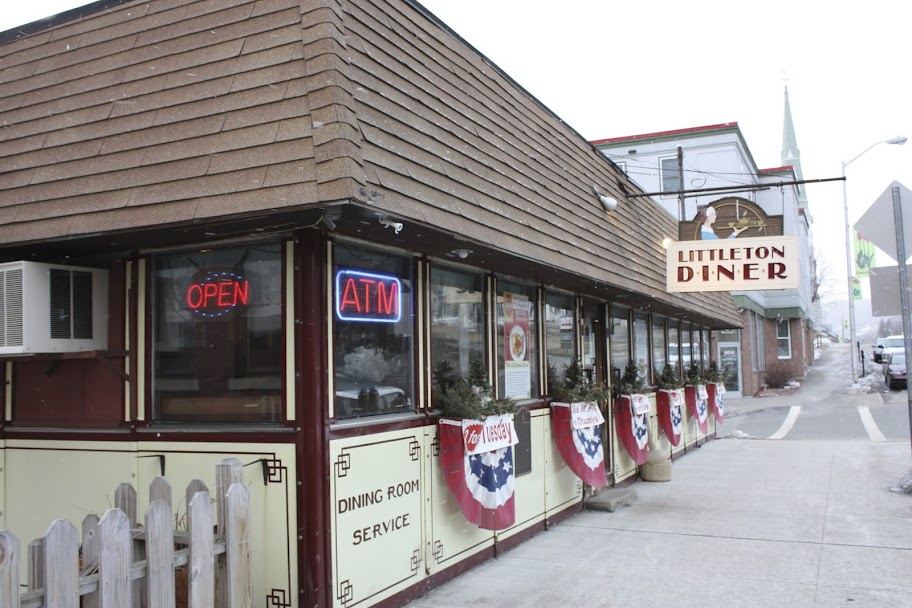 Dinner was in the Littleton Diner, a small mom-and-pop operation that is one of the few remaining train-car diners in the country.  The building was a train car that eventually had a more permanent outer shell built around it.  Supposedly, they were famous for their pancakes, so we all had breakfast for dinner.  I dared to be different and got the french toast…and in the end, we felt that I had chosen…wisely.  The pancakes weren’t bad, but the french toast had it beat.  Also, there was no kids menu, so dinner here was a little pricier than I expected.  It was cool to say we’d eaten in a train car, though.

We returned to the cabin and put the kids in bed, knowing we had a long drive home ahead of us the next day.  As I tucked him in, Dave informed me that he loved the log cabin so much, he wanted to save up his birthday and Christmas money from here on out in order to help us buy one on our own.  He knew we’d need help to do so–“I think it’ll cost a lot of money.  At least a thousand dollars.” 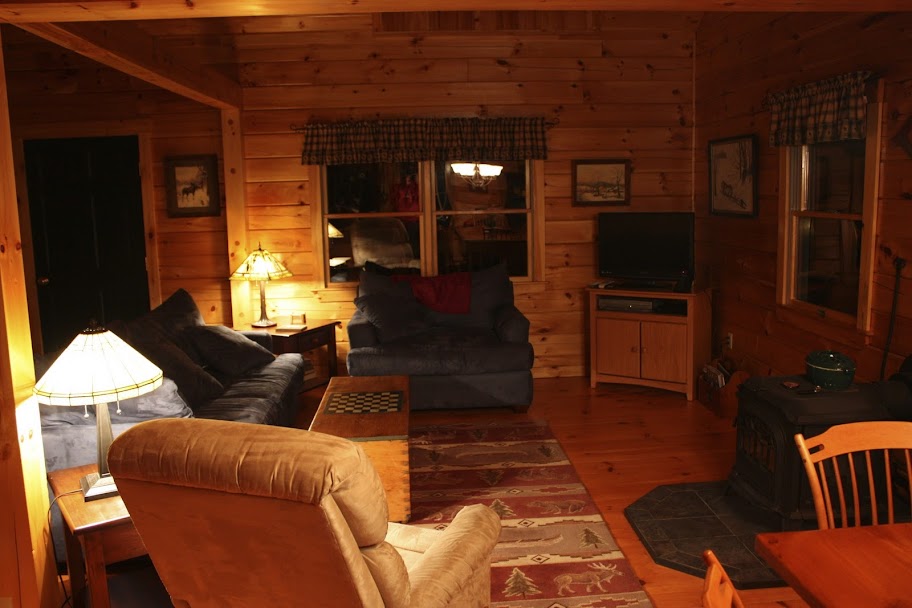 The cabin, before I attempted to burn it down.

It was a bit chilly that night, so I gathered some wood and decided to try out the wood stove inside.  I piled the wood properly, crumpled up some newspaper, and opened the vent to allow air flow.  Then I lit the paper and shut the door.  There was a handle lying on top of the stove to open the damper to the chimney.  I attached the handle to the knob and turned…and nothing happened.  It wasn’t catching properly.  I tried 2, 3 more times.  Nothing happened.

Meanwhile, smoke started to pour out of the cracks around the door and into the cabin.  I fought the urge to run around the room shrieking, “FIRE!” and instead shut off the airflow.  That seemed to do the trick as far as the fire was concerned.  I was glad, too, because burning down the cabin may have cost us our security deposit.  We then set about opening the windows to ventilate the room, which meant 20-degree air came pouring in.  So this may be one of the first instances in human history in which lighting a fire made everyone colder.

Anyway, I had a little bit more success with the nighttime star pictures that night.  See what you think. 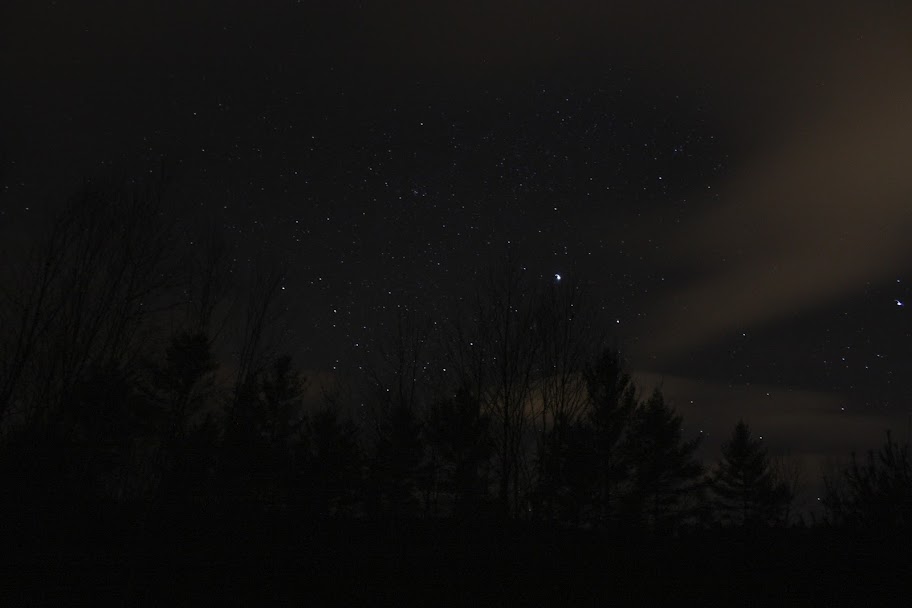 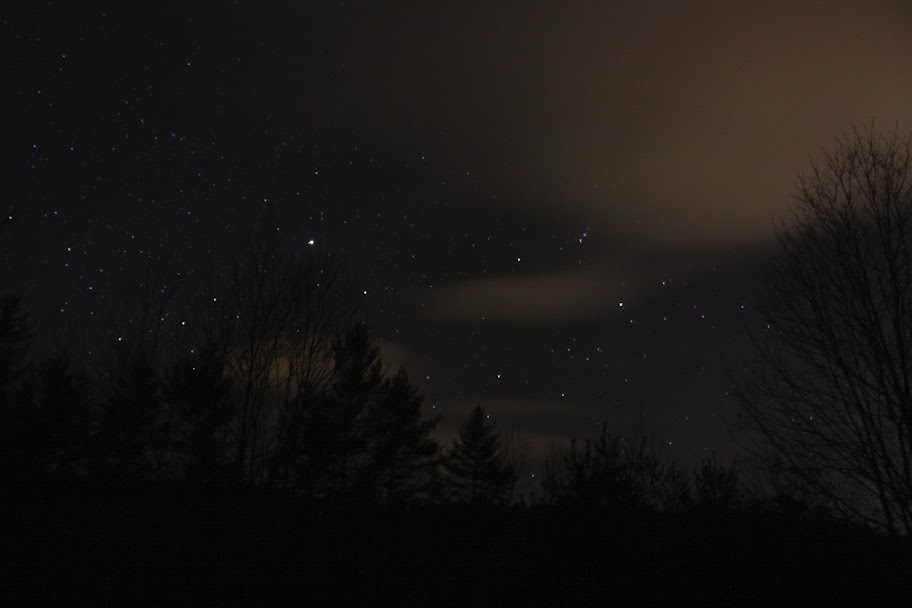 Coming Up Next: Are we there yet?  Not yet…we have a DIS Dads meet!