We’d planned on heading straight up the interstate to the White Mountains after breakfast, but we got distracted.  My wife heard the siren call that only a few magic phrases can provide: “L.L. Bean Outlet”, “Clearance”, and “Sale”.

Come to think of it, I don’t necessarily mind checking that out, either.  They have canoes and Swiss Army knives, compasses and other heavy-duty outdoor stuff.  Not that I have any clue how to use any of them, but I think they still appeal to guys on a primal level.

So, we hung out until the store opened and my wife the Expert Bargain Hunter® found some good deals on a few items.  Then, we hit the road.  Within an hour and a half, we were seeing sights like this: 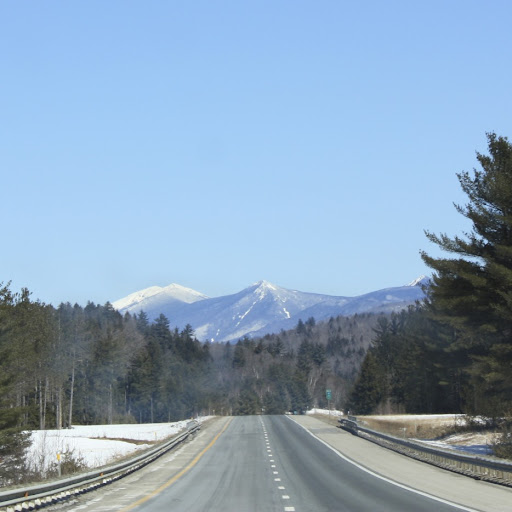 Since we wanted to go to a place called the “White Mountains”, we figured we must be on the right track.  We stopped in the town of North Woodstock, New Hampshire.  I’d  discovered a restaurant called Woodstock Station that we wanted to try for lunch.  It was housed inside an old train station building that had been restored and turned into a restaurant and micro-brewery. 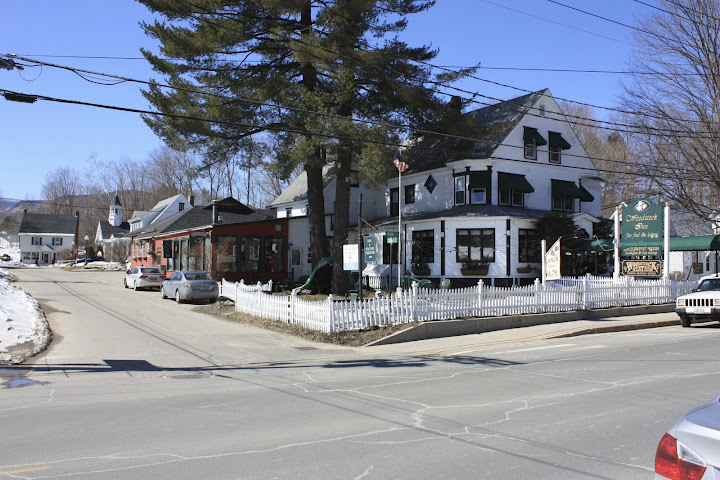 I used the secret side entrance.

The white house is the upscale, fine-dining portion of the restaurant.  Peasants like me were to enter the old train station portion, which is the red building on the side.  I was cool with that.  Give me a good burger and fries over haute cuisine anyday.

That’s exactly what I had–a bbq bacon cheeseburger.  They served it on a sub roll, which was a little odd, but it was tasty.  So was the root beer that they brewed on location.  Julie got chili in a bread bowl smothered in cheese, and gave that a thumbs-up as well.  By far the biggest hit of the lunch was David’s grilled fluffernutter sandwich–an ooey, gooey mess of peanut butter and marshmallow cream with no nutritional value whatsoever (which of course is the trademark of all of the best meals in the world).

After lunch, a stroll down to a mountain stream yielded some nice scenery. 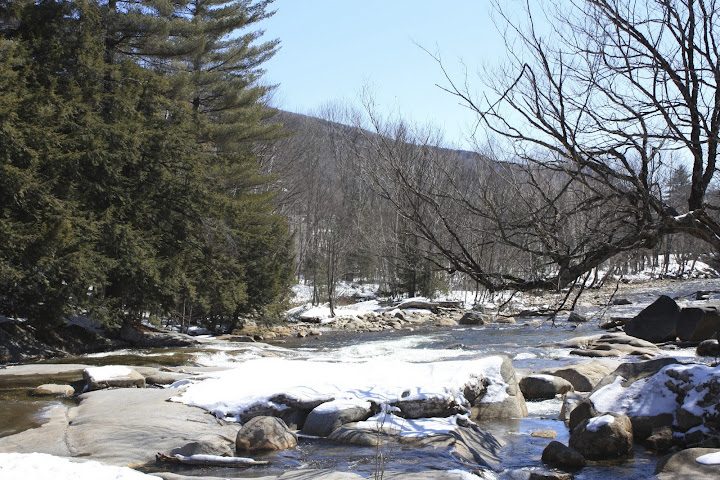 Scotty was highly amused that we were letting him walk around in the snow without having to wear boots.  Here, he demonstrates the proper way to ensure your feet get soaked. 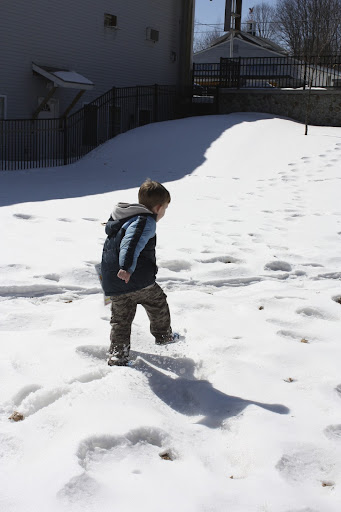 Is this a strut or a march?

Back in the van, we headed to our first sightseeing stop: the Flume Gorge.  Part of Franconia Notch State Park, this is a gorge that has been cut over time by a waterfall that forms a mountain stream. The stream is framed on both sides by steep canyon-like rock walls.  In the summer, a boardwalk is constructed that allows visitors to hike straight through the gorge and enjoy the stunning scenery.  In the winter, the boardwalk is removed.  However, it costs visitors $13 apiece to visit in the summer while it’s free of charge in winter.  It’s a cheapskate’s paradise! 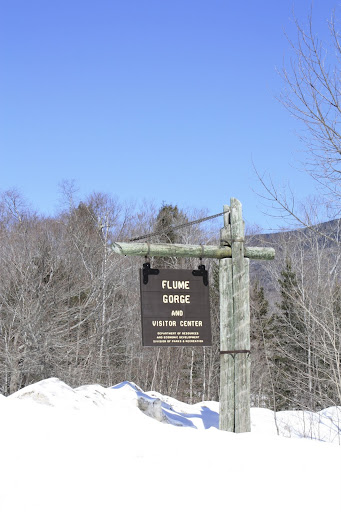 If your sign is covered with snow, the trails may not be accessible.

We pulled into the parking lot, where there were only 4 or 5 other cars present.  All of the other people there had several hundred dollars’ worth of North Face-type winter gear and snowshoeing equipment.  We had our boots, coats and blue jeans.  Julie and I exchanged a glance and wondered if we’d bitten off more than we could chew.

But did we turn back?  Never!  That would be the cowardly thing to do!  We’re much more brave than that! 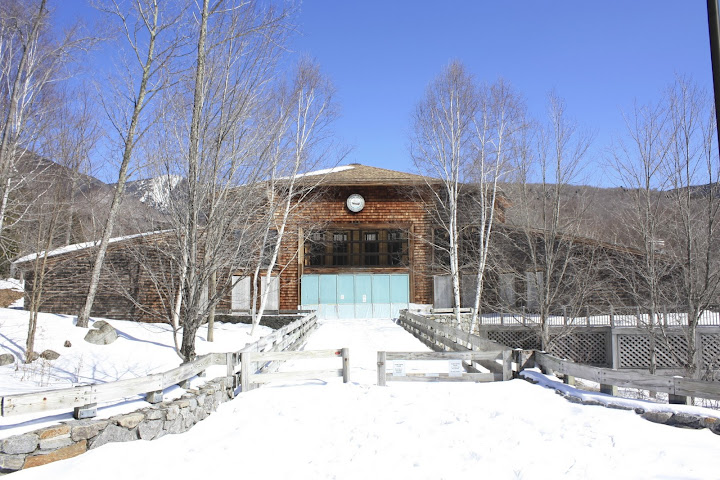 The boarded-up visitor center made for an inauspicious start.

We set off following the trail the other, better-looking hikers had used.  The snow was pretty well packed down and made for decent walking.  Some of the slopes we had to follow were steep, but we did pretty well.  And it was worth it for sights we saw.  We crested one ridge and came upon this beautiful covered bridge: 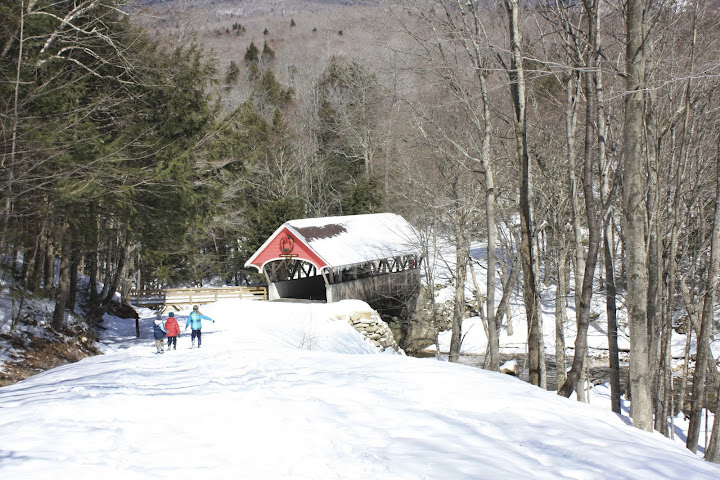 That’s one of my favorite pictures from the trip.  I’m also very thankful that the park left the Christmas wreath up on the covered bridge, because now the Christmas card picture is taken care of.

In order to reach the Flume Gorge itself, we had to climb up a moderately steep slope and walk about a half-mile in total.  I was really proud of my kids.  They asked to stop to rest once in a while, but never once complained, even though I’m sure it was tiring for them.  Instead, Sarah (my outdoors-loving adventurer) blazed the trail for us.  And she didn’t even need fancy-pants snowshoes! 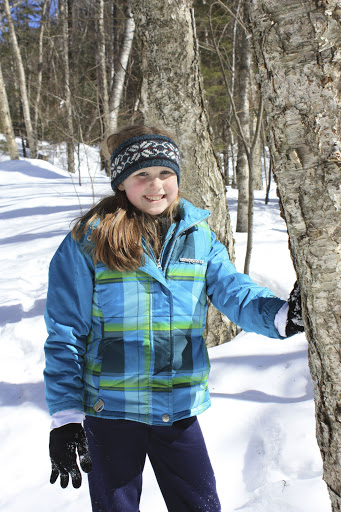 Scotty seemed more interested in beaning me with a snowball.  And really, can you blame him? 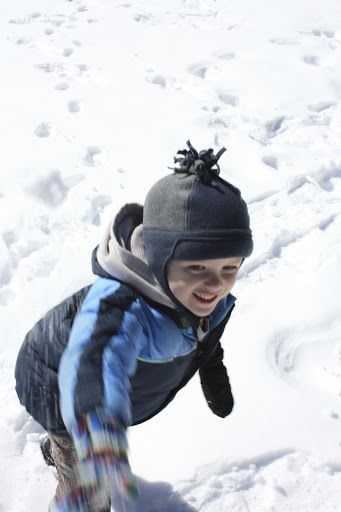 After a long climb, we finally reached the gorge.  The stream was gushing at full force, full of snow melt.  The rock walls were impressive.  And to top it off, the boardwalk was partially in place, which allowed us to see the waterfall–still frozen solid.  I’d never seen anything like that before.  And I’m really glad I got to see this. 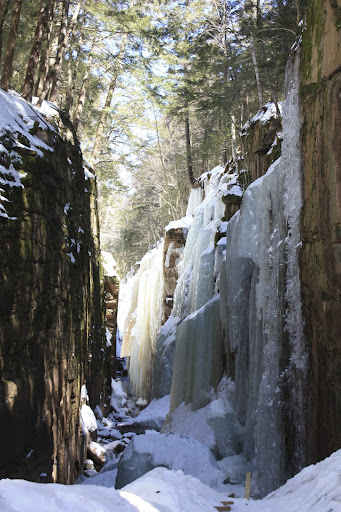 The frozen waterfall in Flume Gorge

Ever been to a place where you just want to stand and soak in the beauty of creation for a while?  This is one of those places.  Note, it did not preclude us from taking our obligatory cheesy photos.  You gotta have priorities. 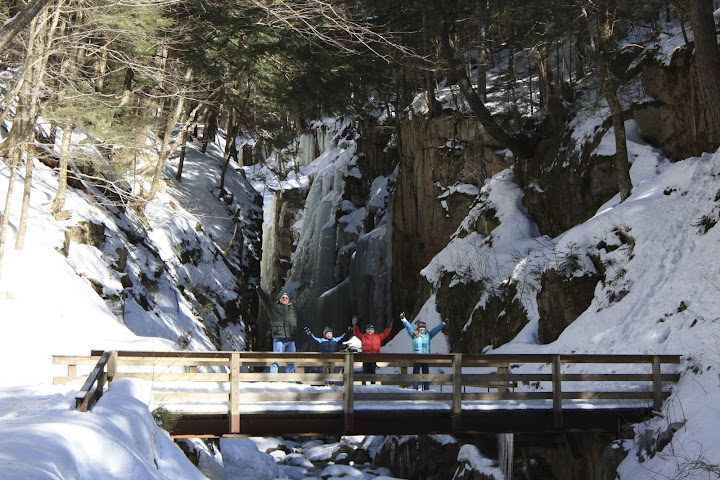 We conquered yet another hike!

The only sound was the rushing of the water down the slopes.  Well, that and the kids pelting each other with snowballs. 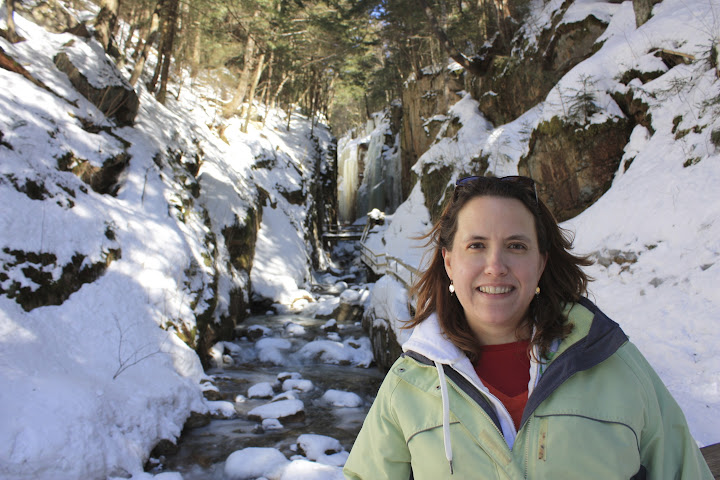 Some cute lady I met on the trail.

We made our way back to the parking lot, re-tracing our steps.  It was still a long, steep trail in the snow, but we did just fine.  I guess Scotty was starting to get a little winded: 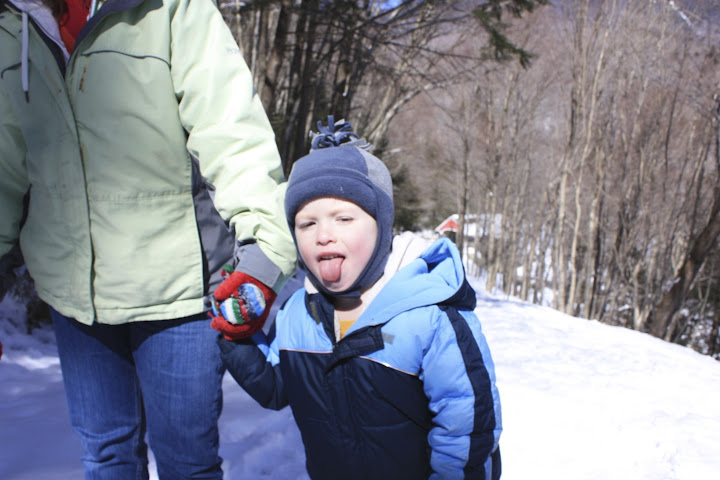 Are we there yet?

And yet, we all made it.  I took this picture just to show the depth of the snow, even at the end of March: 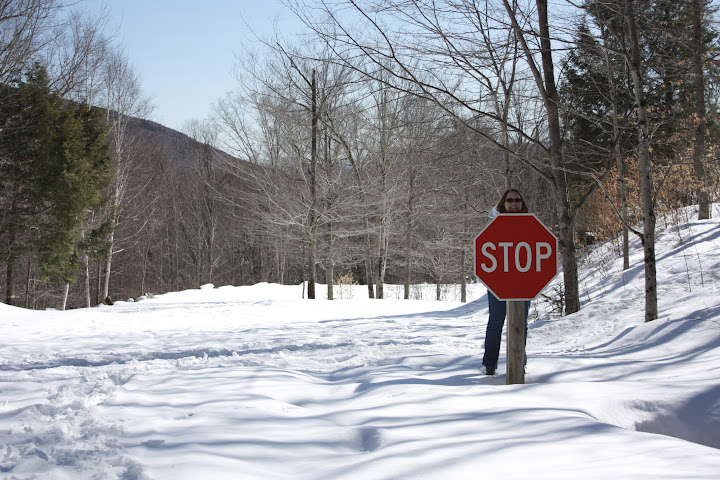 I guess the sign is for pedestrians at this time of year.

Coming Up Next: In our never-ending quest to be Parents of the Year, we subject our kids to more backbreaking hikes!