I officially became an uncle in late February this year, as my brother and his wife (well, more specifically, his wife) gave birth to their first child, a little boy named Patrick.  Given the facts that:

a) My kids’ Spring Break from school was at the end of March, and

b) I will take any and every excuse to take a vacation (including but not limited to important birthdays, school breaks, anniversaries, sporting events, summer and winter solstices, avoiding tax deadlines, faking illness, and brain clouds),

it was inevitable that we’d take a trip up to New Hampshire to meet my new nephew.

We left Delaware on Saturday, March 26.  Knowing we had 8 hours of driving ahead of us and a friend in Connecticut to meet for lunch, we set out by 8:00 a.m.  The kids were very excited to meet their new cousin, and expressed this excitement by counting down the minutes until they were allowed to start watching DVD’s in the car.  Being road trip veterans, we fought fatigue by bringing along the Official Road Trip Food of the DISDads Club©. 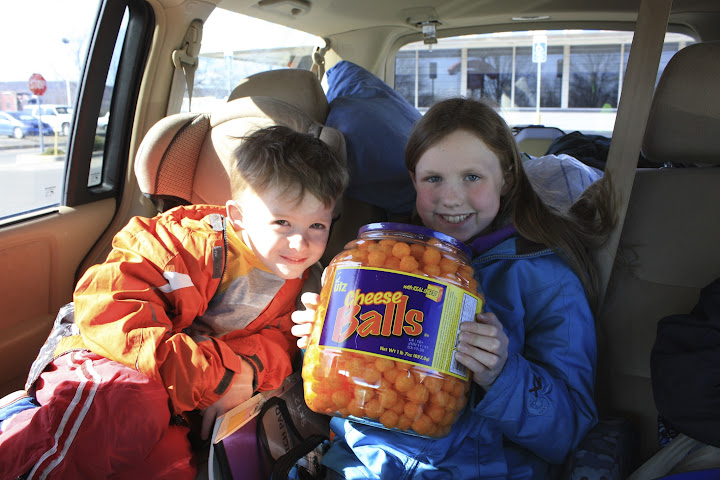 There are various ways to get around New York City going north.  One is to take the NJ Turnpike straight through to the George Washington Bridge, which takes I-95 right through the north side of the city.  Another is to jump from the turnpike to the Garden State Parkway, which skirts through New Jersey suburbia and eventually links up with the Tappan Zee Bridge across the Hudson River to the north of the city.  During rush hour, neither option is very appetizing.  Being a Saturday, we thought the Tappan Zee would be fine.  On the other hand, the GW Bridge has been backed up since the day it opened, and possibly before that.

We wanted to use the lesser-known 3rd option, which was to take the Palisades Parkway up to the Tappan Zee.  The Palisades Parkway is a road that winds along the Hudson River on the New Jersey side.  It runs along a line of cliffs and affords various views of the NY skyline from several scenic overlooks.  It may be hard to believe, but this is actually a nicer drive than the Garden State Parkway.

The only problem is, you can’t get there from here.  I studied maps and Google Earth beforehand, and tried to decipher the spaghetti that is the NJ Turnpike from above.  At various points, the Turnpike divides into cars-only and truck lanes, then comes back together, then splits an offshoot for the Holland Tunnel, then splits into an eastern and western branch, then ends and turns into I-95, then splits into local and express traffic lanes.  Rumor has it one lane leads to a Stargate and the 5th Dimension, where the first thing you see upon exiting will still be a Denny’s and a Red Roof Inn.

I thought I’d found the way to the Palisades Parkway, but when we were actually driving, it became clear that this was no easy task.  There are no signs directing you from the Turnpike to the Parkway.  You have to know that you reach it through Fort Lee, NJ.  No problem–I got off at the Fort Lee exit.  This dumped me into town.  From there, the signing was…still non-existent.

We drove aimlessly through Fort Lee, searching for an entrance to the Palisades Parkway.  Finally, just past the laundromat and a Chinese restaurant, we spotted a tiny brown sign approximately the size of a Post-It Note that pointed the way to the Parkway.  A few minutes later, we were checking out this view: 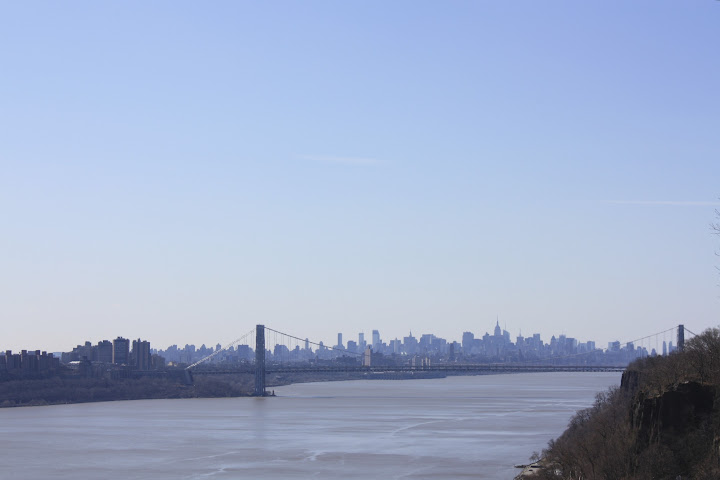 The GWB looks a lot better when you're not driving on it.

See?  That was worth the trouble.

We met my friend in Danbury, CT for lunch.  He’s a pastor who left my church in Delaware to plant a new one up there, and has done some amazing work despite struggling to find a foothold in the community.  He feels like they’ve turned a corner, and it was great catching up with his family.  Anytime you leave with a full belly and a lot of laughter, you’ve had a good visit.

Unfortunately, we had too much fun, and were now behind schedule.  As we passed through Hartford, we called my brother up in Exeter, NH and told him we’d be another 3 hours.  “Hartford?  That’s more like 4,” he said.  My wife, Julie, said ok and hung up the phone.  “We’ll do it in 3,” I vowed.

3 hours and 7 minutes later (not to brag, or anything), we pulled into their driveway.  Out of respect for their privacy, I won’t post pictures of baby Patrick here.  But suffice it to say we had a great time meeting our new cousin/nephew and his two exhausted first-time parents.  At one point, my sister-in-law remarked that she thought babies were supposed to sleep.  (I’ll pause here for all of you veteran dads to finish laughing.)

I told her they do sleep…in hundreds of 2-minute shifts.

Our kids all got the chance to hold their cousin.  Patrick got a little…well…gassy while my son David held him, which produced a fit of the giggles.  My other son, Scotty, held him for about 30 seconds and then passed the baby to my daughter, Sarah.  “Here you go, Sarah–you can have it now,” he said.

We bid our goodbyes that night and headed to our hotel near the Manchester NH airport.  As we drove, we asked the kids how much they liked meeting Patrick.  They all agreed that it was fun to hold a newborn baby.  David had another insight as well.

“I smell like baby farts,” he said.  Then he giggled again.

Coming Up Next: Into the White Mountains! (if my wife ever finishes shopping)