Located in the Shenandoah Valley in Virginia, Luray Caverns was discovered in 1878 by Andrew Campbell.  As the story goes, cold air rushing out of a limestone sinkhole blew out a candle he was holding.  After he and his friends dug away at the hole, they discovered the largest series of caverns in the Eastern U.S.  Personally, I think it would have been more fun if he’d fallen in a hole or been attacked by a Virginia Yeti, but you can’t re-write history.

The place has grown as a tourist destination since I’d last visited as a kid.  There are a series of buildings set into the side of the hill where the cave entrance is located.  One building houses the cave entrance/ticket center/gift shop, and the others are snack bars, restaurants, and even more gift shops.  There is also a garden maze and a car museum, because when you think of cave exploration, you naturally think of old cars and garden mazes.

We had hoped to avoid the heavy tourist season by coming in April, and although the line for tickets stretched out the door, the parking lot was still half-empty when we arrived.  The line moved fairly quickly and we were ready to explore by noon.  They used to have tour guides that took you through the cave, but they have been replaced by pre-recorded tapes–the kind where you enter a number that corresponds to a sign at that location in the cave and then listen to the Movie Trailer Voice Guy tell you about that spot.  It’s not as personal, but it does allow them to move more people through the caves as there are no longer assigned tour times.  They have a separate recording for kids, too, which has them looking for clues, ghosts, and mysteries.

Anyway, let’s get to what you really want to see: pictures. 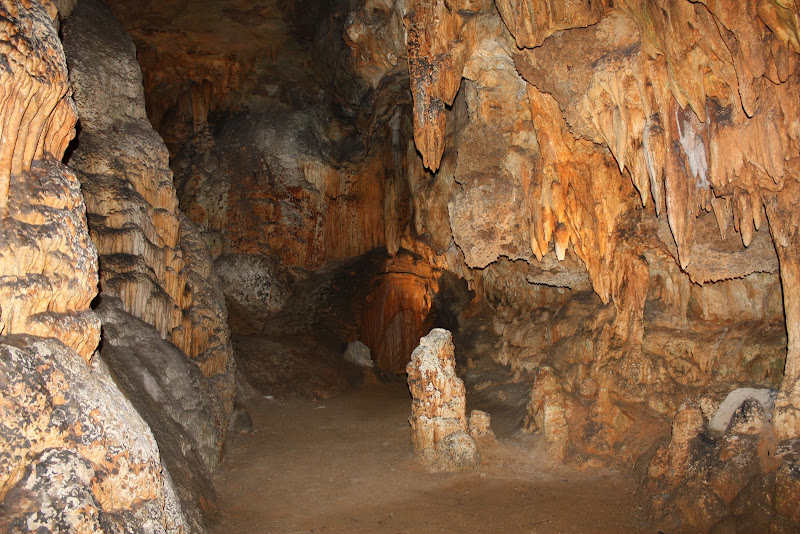 Our kids got to learn about stalactites (hanging down from the ceiling) and stalagmites (growing up from the floor). Later, after we got home, David compared streamers hanging on a doorway at a birthday party to stalactites. Yes, we are a nerdy family.
By far my favorite portion of the cave was the reflecting pool. This was a large pool of water that produced a perfect reflection of the cave ceiling above. The stillness of the water created the illusion that there was a huge, deep cave floor riddled with stalagmites. Instead, we were told that the water at its deepest point was only 20 inches.  I could have stared at this room all day long. 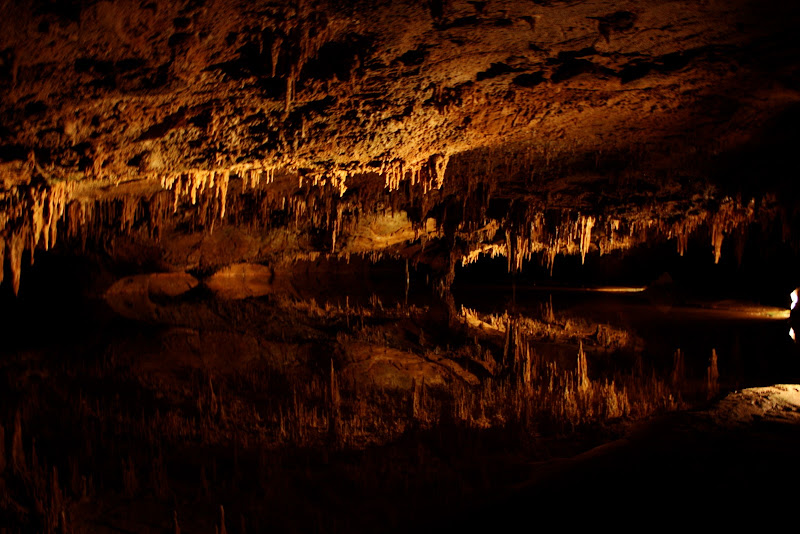 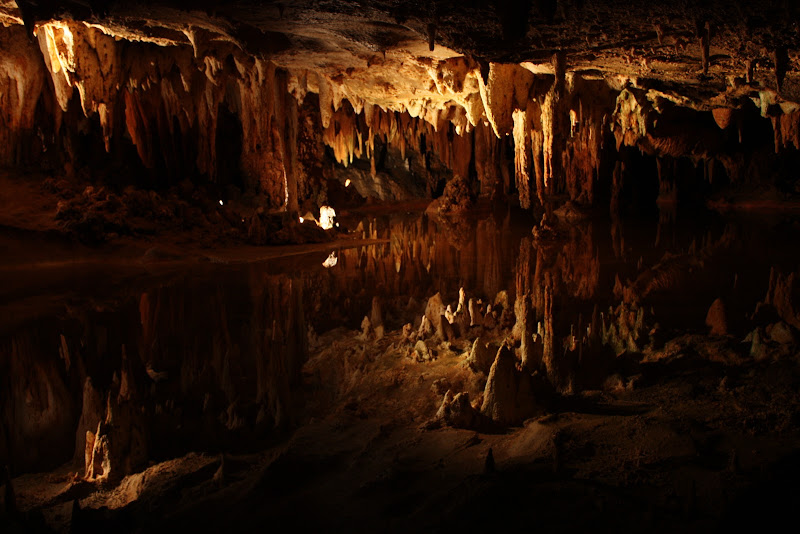 Unfortunately, I couldn’t stay, because Scotty started freaking out.  He did this a couple of times in the cave.  He’d be walking along, doing just fine, happy as can be.  Then, without warning, he’d start to bawl and say he wanted to leave, now.  Then he’d stop and move on.  The only theory I have about this behavior is that he was listening to the kids’ tour on the headphones, and I’m guessing these might have been the parts where they started talking about ghosts.  Can’t wait to take him on the Haunted Mansion ride at Disney World!

The cave temperature was about 55 degrees, but we didn’t feel the need to put on our sweatshirts.  We must be a very manly family.  Either that, or it wasn’t as cold as they said it was.  They also said the cave was about 164′ deep beneath the ground surface. 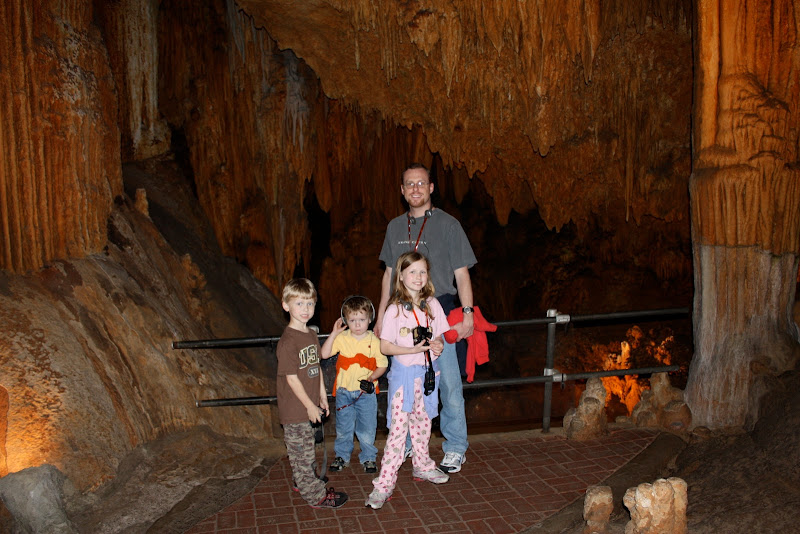 Indiana Jones has nothing on us. 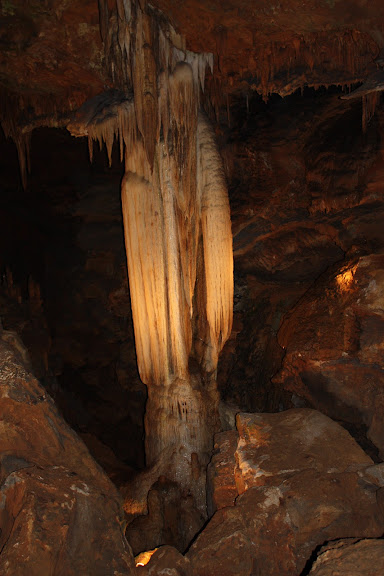 A formation callled Pluto's Ghost. I have no idea why.

At one time, a musician/artist/inventor built a “stalacpipe organ” down there.  It is supposedly the “largest musical instrument in the world”, as it uses hammers strategically placed to hit stalactites and produces musical notes.  This area was used for weddings and other gatherings in the past, and the organ still plays.  Sadly, we didn’t get a demonstration. 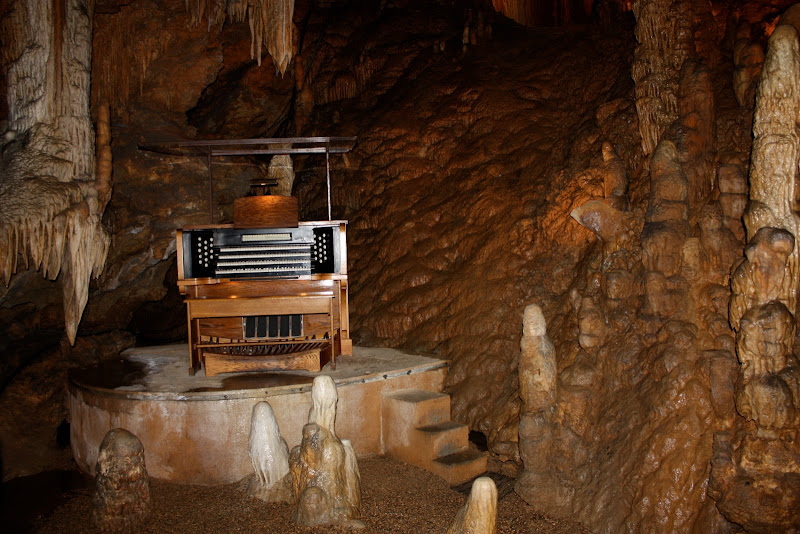 We also saw a formation called “Two Fried Eggs”. This is where a couple of stalagmites broke off from their foundation, leaving a shape that resembles…oh, come on, do I really need to spell this out for you? You used to be able to rub them for luck, but now you have to simply observe from behind the railing. Yes, they’ve installed pipes, handrails, miles of electrical cable, brick floors, and even a pipe organ, but don’t you dare touch that precious broken stalagmite! But I ordered a cheeseburger!

Anyway, we finally emerged after about an hour and a half, much to Scotty’s relief. We had decided to try to save as much money as possible on this road trip, so we adopted the practice of my family’s past road trips of eating peanut butter and jelly sandwiches in the parking lot for lunch. This is a tradition handed down through generations in my family. We’ve had PB&J in some of the most beautiful places in the country.
Sandwiches were augmented, of course, by cheese balls and Pringles. Here, Scotty demonstrates his method for eating chips. 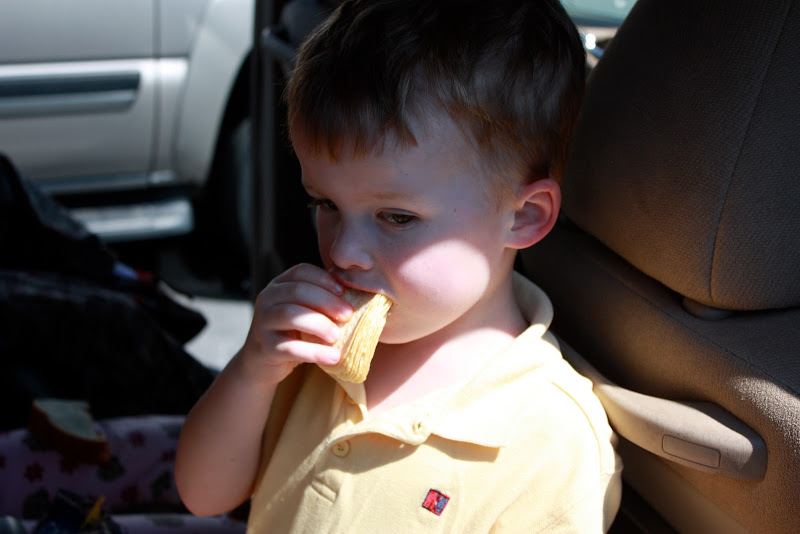 I think he could have fit 5 more in, easily.

Naturally, after this bite, he declared himself “full” and handed me the rest of the stack. No, I didn’t eat them. I was a model dad and offered them to my other kids.

Coming Up Next: Shenandoah N. P. and a steep hike.  The kids go down…but can they come back up?