Did I mention that the weather in New Jersey at the beginning of February is crappy? 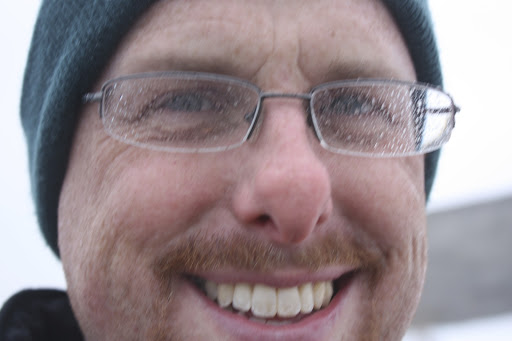 We’d finally had enough of the stinging, icy rain, so we ducked inside the Statue of Liberty museum, which is conveniently located within the pedestal.  I think I had to run back outside to track down my mom, who cannot leave any historical location until she has read every single word on every single sign.  Because of that, my wife ended up taking this picture of what the Statue’s face looks like in the original copper color:

This pictures seems empty, doesn't it?

And that, my friends, is a missed opportunity.  Had I been there, I can assure you that I would have posed one of the kids here picking her nose.  Yes, you would think this idea would have occurred naturally to Julie, but somehow we missed it.  I can only apologize for being derelict in my photographic duties as a father.

We did at least find some copper toe-jam.

That foot is the actual size on the statue.  Here’s a model showing what the support structure looks like inside:

Who needs the sculpture, anyway?

I realize that may only look cool to nerdy engineers like me, but I figured Dads in general like to see how stuff is put together.  Usually before it gets blown up on Mythbusters.

The museum was really well done, and very patriotic.  I was moved by a wall of quotes gathered from immigrants sailing into NY Harbor.  One described the reaction of a boy waking up the entire ship by shouting, “The Statue!  The Statue!  I can see her!”  You can only imagine what they felt after so much time cooped up on the ship, not knowing what lay ahead.

It was getting late, and we had friends to meet for dinner, so we headed back outside for a group shot in front of the statue.  We like to be able to prove we were there, and one of these days we’ll assemble our shots like this for a collage on the wall or something.  In any case, we stood in the freezing rain and asked a gentleman to take our picture.  This poor guy moved back against a railing, crouched down to frame us against the statue, and even went so far as to kneel in a puddle in order to get the shot.  He pushed the button and then stood up, handing us the camera and walking away.  We immediately checked the view-screen to admire our picture-perfect postcard shot of the statue and found…nothing.

It seems the man had succeeded in focusing the camera lens, and figured once it beeped, it was done.  So, we tried again with another passer-by.  He was more successful in actually taking a picture, but not so successful in avoiding chopping off the statue’s head.

Finally, my dad caught up with us and was able to properly use the camera. 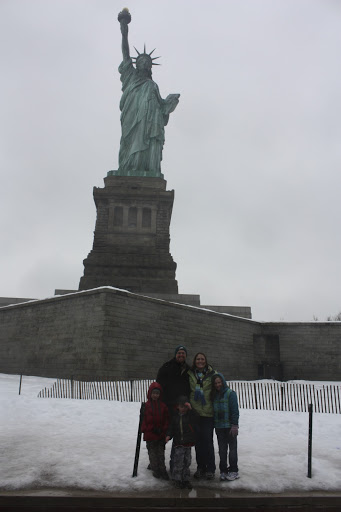 Ok, so you can’t really see us that well.  But we were there, darn it!

We had some time to kill before catching our ride back to shore, so we did the Disney thing and exited through the gift shop.  Although I pushed hard for green foam Liberty crown visors for everybody, I was outvoted. 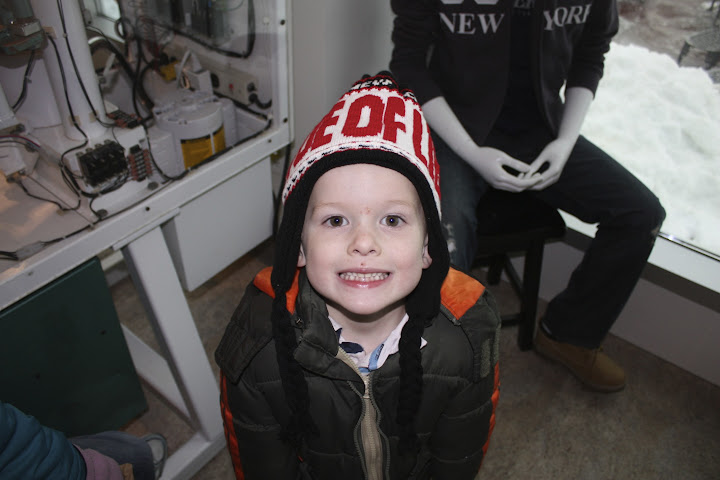 Hey, you can still do stupid hat pictures outside of Disney World!

After riding the ferry back to shore, we piled into the van.  Remember how we strategically parked to beat the crowds?  It worked like a charm, and we beat both of the other cars out of the lot.  We met up with my old roommate from college and his family at the Rainforest Cafe for dinner on the way home.  As I’m sure most of you know, the Rainforest Cafe makes for easy, quiet conversation as well as Alka-Seltzer helps a seagull’s digestion process.  But this was Sarah’s birthday, so it was her choice.  And she loved it.  Julie went all out and ordered the special What’s-His-Face Alligator cups for the kids.

Surely everybody can name this famous character.

Those cups of soda cost $7 a pop.  For that price, I expected them to be filled with a rare syrup extract from high above Macchu Picchu in Peru that is distilled from the Fountain of Youth.  But no, it was just Sprite.

Well, the kids liked it.

So, that was the trip.  When we got home, I asked the kids what they thought of visiting Ellis Island and the Statue of Liberty.  David said climbing to the top was “awesome!  And I didn’t get tired–I raced all the way up!”  Clearly, he viewed this trip as a physical achievement.

Scotty said that he really liked the gift shop.  So I’m thinking he may have been a little young to fully understand the history of the place.

That’s ok.  This was Sarah’s birthday trip.  I asked her what she remembered, and besides the climb to the top, she thought it was amazing that so many people had come to this country.  I asked why she thought people would do that.  “For freedom?” she asked.  “That’s right,” I said.  I pointed out that the Statue was given to us as a symbol of the freedom our country allows.  “Why wouldn’t everybody have that?” she asked.

“Well, honey,” I said, shifting into all-knowing Father mode.  “Not everybody in the world loves freedom.  Some people crave power, and they want to rule over everybody else.”

Sarah paused for a moment in deep contemplation.