Having explored Ellis Island, eaten our version of a gourmet lunch, and failed to find vague ancestors, it was time for the main event.  We boarded the ferry and set sail for Liberty Island.  Within a few minutes, she finally came into view: Lady Liberty herself.

The view that greeted immigrants arriving to Ellis Island.

You know, I don’t think they mentioned what her first name is.  I think she looks like a “Martha”, myself.

This view is less famous. Not sure why.

As the boat docked, we were directed to head straight to an information office nearby in order to get wristbands that would enable us to climb up to the crown.  We got our first indication that security was tight on the island via the armed guard that walked past us on the path.  The rifle he was carrying was taller than my kids.

The ranger inside the office inspected our tickets and then fitted us with nylon-type wristbands like the ones you get at waterparks which require garden shears to remove.  He measured Dave’s height by the desk counter, which he barely cleared (whew).  Because of the tight security, the ranger instructed us to make sure the wristband was visible at all times, and to be obnoxious with it–holding it right up to a ranger’s face if need be.  Well, if there’s one thing I’m good at, it’s being obnoxious.  So I figured that part would be easy.

Our next step was to proceed up the path towards the statue and place our belongings into lockers, which were available to rent for $3, because it’s illegal for anything to be free in New York.  In order to get a locker, you had to insert your money into the machine, and then place your finger on a fingerprint reader.  My dad was startled when he put his finger on the reader and the screen welcomed him by name.  This was no joke.  I didn’t get a similar greeting, so I assume they haven’t discovered my secret identity yet.

The only item we could take with us was a camera.  Next, we had to go through yet another airport-style security gate, complete with removal of shoes, belts, watches, coats, etc.  Considering we’d already done this at the ferry dock, it felt like a move from the Department of Redundancy Department, but I wasn’t in position to complain.  From there, we entered the pedestal of the Statue and checked in with the ranger desk (making sure to obnoxiously wave our wristbands in front of their eyes).

Some facts and figures: The Statue was designed by sculptor Frederic Bartholdi and officially dedicated in NYC on October 28, 1886.  It’s been guarding the entrance to New York Harbor ever since.  The structural support was designed by Gustave Eiffel (yes, that Eiffel) as a truss that supported welded bars that were hand-crafted to attach to the statue’s copper skin from the inside (yes, it’s as tedious as it sounds).  This allows the Statue to sway slightly with wind to prevent stress cracks in the copper.  The copper skin was originally bronze, and has oxidized to the green color you see today.  It’s also only 3/32 of an inch thick, which is about the same thickness as two pennies held together.  There are 354 steps to the top, which is important because you have to climb Every.  Single.  One.  More facts and figures can be found here: 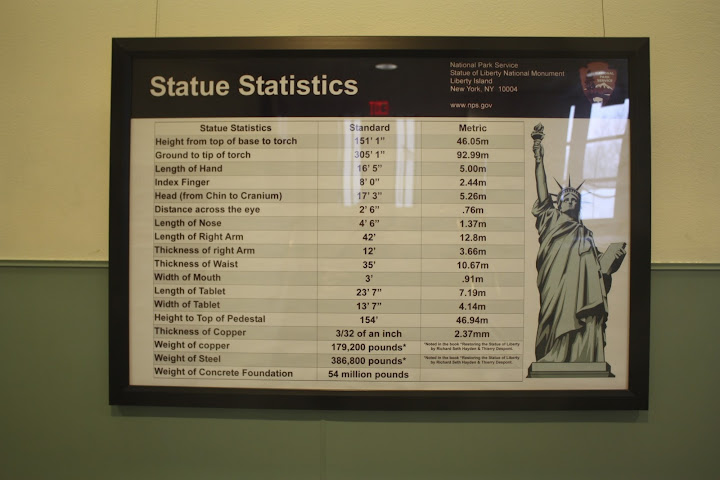 Here's the stuff I was too lazy to type.

When we first heard that we’d have to climb 354 steps, we worried that it would be a brutal climb.  In reality, that number includes all of the steps you climb in the pedestal as well, and there are numerous landings to catch your breath.  It’s really not too bad.  You start in the main lobby of the pedestal museum, where they have the statue’s original 1886 torch on display:

Scotty is still caught off-guard by the picture-taking process.

From there, you climb.  By the time we actually entered the base of the statue herself, the ranger stationed there informed us we were more than halfway to the top.  Julie seemed about ready to kiss the ranger for that.  I couldn’t have that, so I obnoxiously waved my wristband in his face again.

The stairway in the statue is a double-spiral.  One side is for traffic going up, the other for going down.  I thought it was a pretty ingenious design: 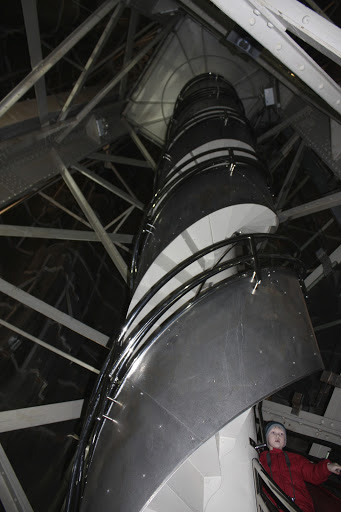 In that picture, Dave is on the “up” side, and just to the left is the “down” side of the stairway.  Inside the statue, you can see all of the thousands of iron bars custom-welded to the copper “skin”.

Each one must be carefully fitted. If you miss one, the statue will crumble. No pressure.

Apparently, they all had to be individually replaced several years back.  Anybody want to volunteer the next time that job rolls around?

The kids were amazing.  They flew up the stairs, as though it was a simple walk in the park.  The rest of us adults wheezed behind, obviously much more out of shape cautious.  Sure, kids like to be “first”, but Dave and Sarah just didn’t stop.  Maybe this red-meat-and-cheese diet isn’t all it’s cracked up to be.

Finally, we arrived at the crown.  After 2 separate security screenings, a ferry boat, wristbands, being obnoxious to park rangers, and getting fingerprinted in order to rent a locker in which to place all of your worldly possessions, you get to stand in a cramped space barely wide enough to fit your family and look out over…well, not much of anything.  The face of the statue faces away from the city and looks out over the bay, so there’s not a whole lot to see.  Especially in fog.

But that’s not the point!  The point is, we climbed to the top of the Statue of Liberty!

The successful climbers. Dave, Sarah, Julie, my mom, and some out-of-focus guy.

It felt like an accomplishment, so we took a little time to soak in the view (or lack thereof) and enjoy the rest.  It’s hard to maneuver in there to take pictures, but we did our best.  You have to try and lean out to the various windows in order to get any views.  Here’s the best we did on the torch:

I'm pretty sure this is the torch.

I was able to contort myself and get a cool picture of the tablet with Dave’s smaller camera.  I can’t quite describe the position I was in as I dangled the camera over the window to get this shot, but try to imagine an inverted Heisman Trophy.  Please, do not try this at home: 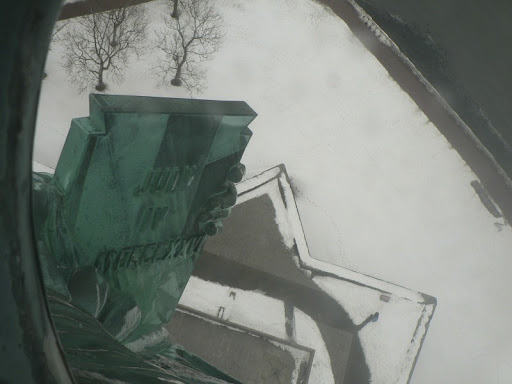 If you ever wanted to know what 1776 was in Roman numerals, well...

Here’s Sarah checking out how thin the copper skin is.

How does something that thin last 125 years?

The ultimate view might be a let-down, but I feel like this is something everyone should try to do at least once in their lives.  How many people can say they’ve stood at the top of the Statue of Liberty?  It’s an American icon, and with good reason.  Plus, by climbing 354 steps, it totally justifies ordering a greasy cheeseburger, fries and extra mozzarella sticks later for dinner.  And you can take a cheesy “We conquered it!” picture.

Admit it, you take cheesy pictures like this, too.

The climb down took almost as long, just because the stairs are narrow and the statue leaks on rainy days, so it was a little damp.  Julie decided to try and take a picture looking down into the statue from the stairway.  She promptly looked down, got vertigo, and handed me the camera.  See if the view does anything for you: 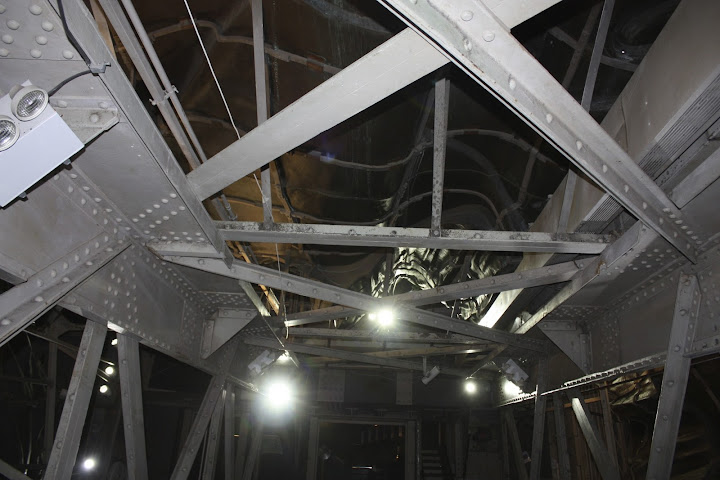 In the movies, they tell you never to look down. I wonder why?

The kids moved at breakneck speed and were waiting for us cautious people at the pedestal, where we could go outside and take in more of a view (approximately 100′ high).  Here are some of the sights: 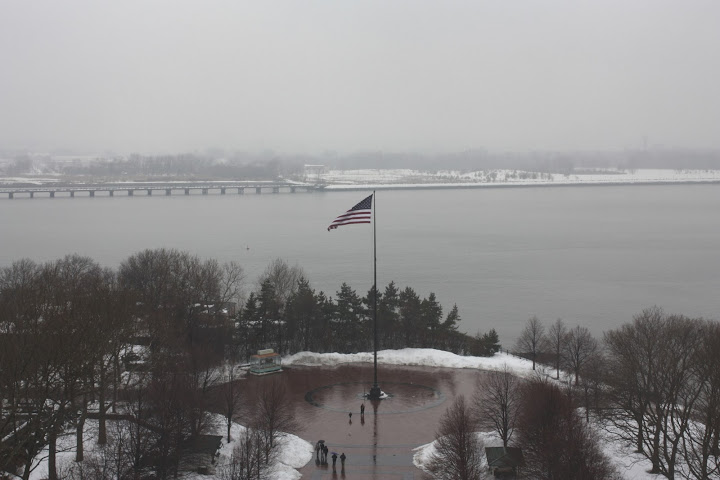 Two cute girls I found on the pedestal 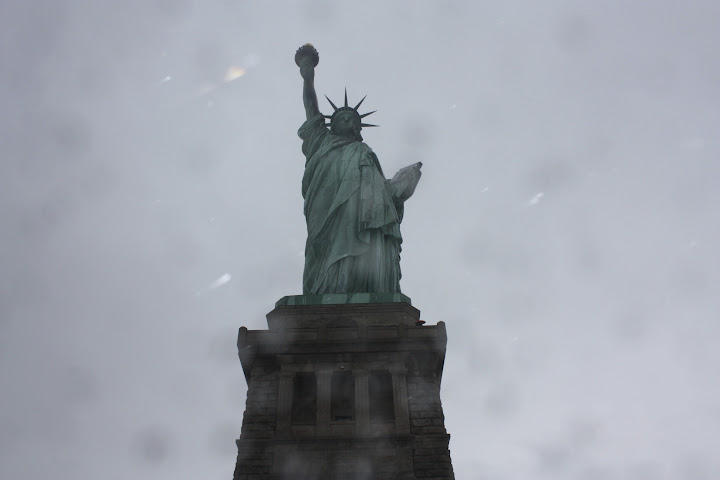 Another view of Martha.

Even with crappy weather, it was a fulfilling sight.  The Statue, Ellis Island, and New York City are larger-than-life destinations.  The sense of history is palpable.  We tend to complain a lot about our country and its various leaders/bureaucracy, but it’s a good time to remember that so many people were willing to leave everything behind just for the chance to start a new life here.  This country is a special place, and I hope we never forget that.

Coming Up Next: a look inside the Statue museum, and a final wrap-up.