Avast, me hearties! Join me now, as we board our vessel to plunder and pillage the depths of New York Harbor! We’ll send these wretched souls to Davey Jones’ Locker! Yarrrrr…

Whoops, sorry about that. I was reading Barry’s Trip Report and had pirates on the brain. What does “avast” mean, anyway? Is the pirate talking about the vast ocean before him? Or something else entirely? Discuss.

All done? Good, let’s move on.

We did indeed board our vessel, but it was a ferry boat marked “Statue Cruises” that moved at a top speed of about 3 miles every 7 hours, so I doubt it was striking fear into anyone’s hearts. On the plus side, it enabled us to do a family photo in front of what may have been New York City. 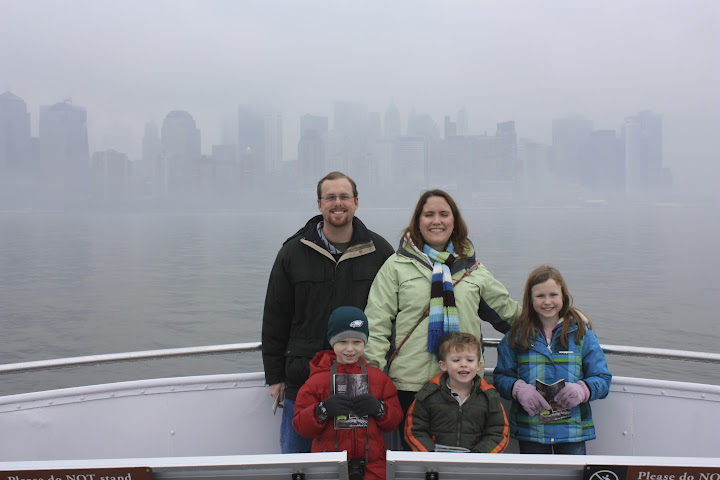 You may notice in that picture that Scotty is doing his own thing, and not paying attention to the camera. This is called foreshadowing.  It looks like he’s talking to someone in that picture, but I’m not exactly sure who that might be.

In a matter of minutes, we landed at Ellis Island.  I’m no architecture student, but I believe this building style represents the Way Cool era of building construction. 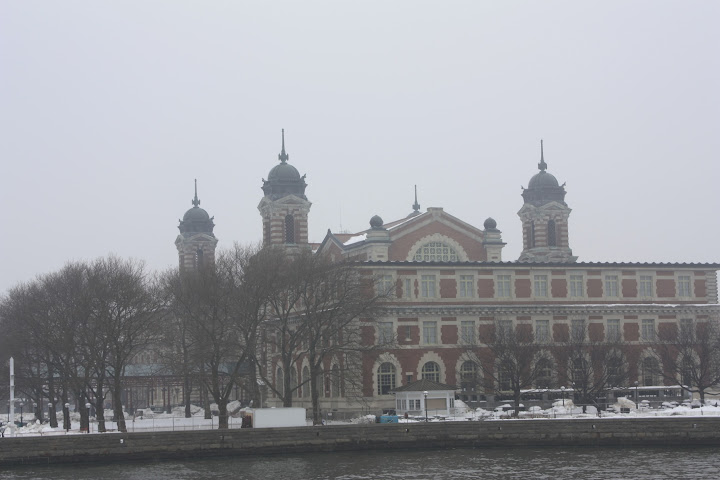 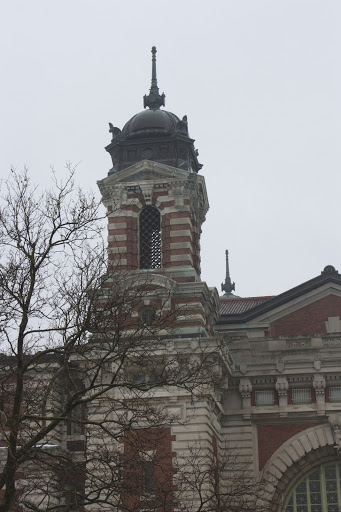 Closeup of the tower, so you can see some of the building details. 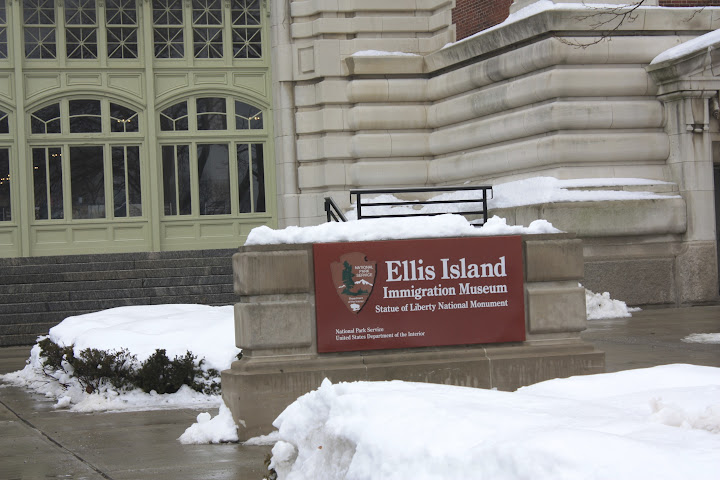 You didn't think we'd forget the sign picture, did you?

Ellis Island served as the primary point of entry to the United States for immigrants from 1892 – 1954.  It was originally a tiny island in New York Harbor that held Fort Gibson, but was then expanded by landfills to create the Ellis Island immigration center.  Most of the immigrants processed came through before 1924, when the Immigration Act enacted stricter standards for immigrants and also allowed for processing to take place at foreign embassies.  And if you think I remembered all of this from the tour, you obviously have never heard of Wikipedia.

If you’d like to read more on Ellis Island and see a few photos that were actually taken on a clear day, see the Wikipedia entry here: http://en.wikipedia.org/wiki/Ellis_Island

The museum had all sorts of exhibits, ranging from the countries immigrants hailed from and currencies they had to exchange to an exhibit on the restoration of the building by the National Park Service.  There was extensive information on the types of medical ailments the doctors were looking for when they inspected immigrants.  Those with suspected conditions were usually marked with a large chalk letter pertaining to the ailment.  They were often detained in medical wards on the island to receive treatment, or else sent home.  According to the official statistics, 98% of immigrants were allowed entry into the U.S.  But when you’re processing millions of people, 2% is still a fairly large number. 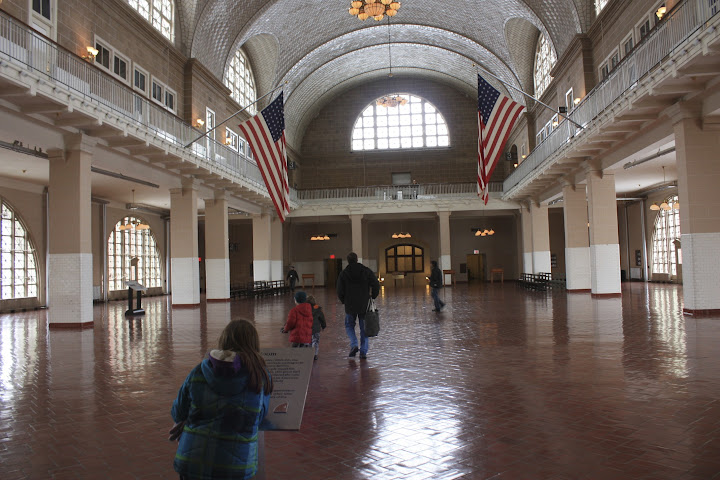 The Great Hall. It was much more crowded in the early 1900's.

Naturally, there were all sorts of stories from immigrants about how they “beat” the system.  Several simply wiped off the chalk marks or turned their clothing inside out.  Immigrants were also expected to have enough money for train fare.  One Swedish man proudly bragged of lying to the official when he didn’t have a dime on him.  In those days, people would do anything to get into America. 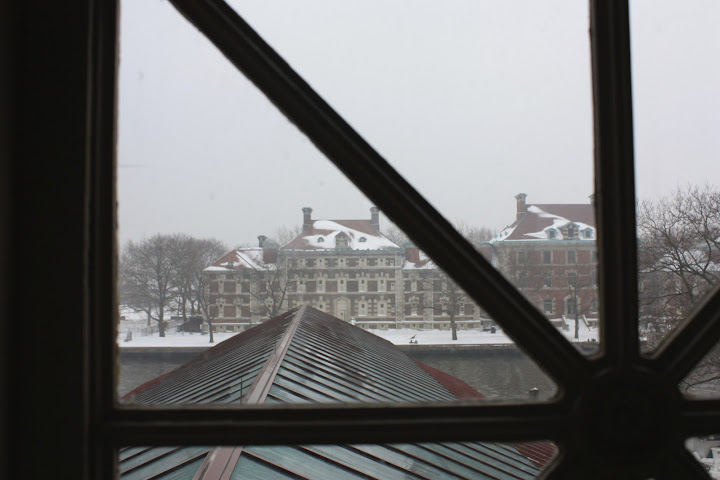 One of the medical wards where some immigrants were detained. Also, it's a cool picture.

One exhibit showed a reading test that was administered to the immigrants.  It basically consisted of having them read one of several verses of Scripture from the Psalms.  You may be shocked to learn that none of the immigrants filed lawsuits over this. 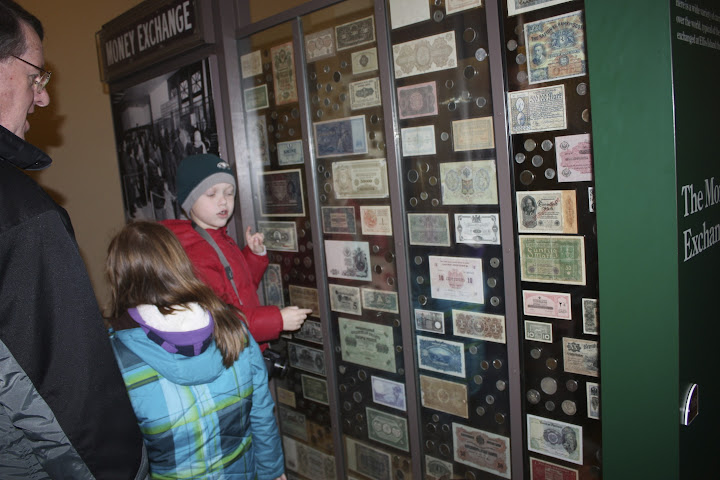 This display showed examples of currencies exchanged for dollars. 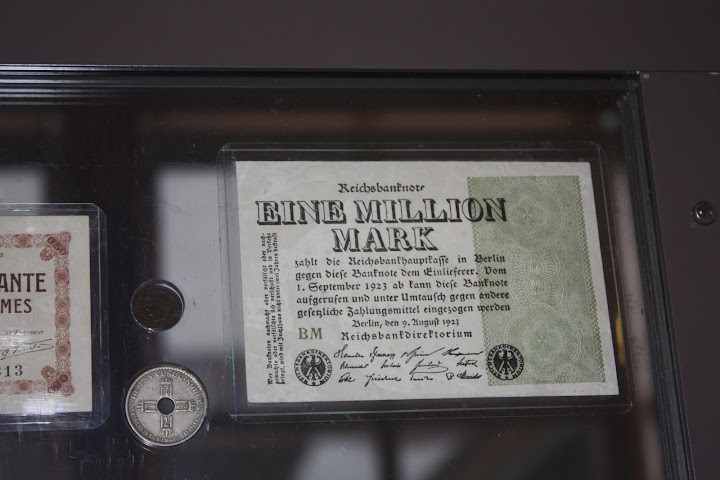 This kids thought this was funny. Can you imagine a million of me? Why are you making that face?

Going through the exhibits was a sobering experience.  These people were trying to escape some very ugly situations at home, and basically leaving all they had ever known for an unknown future.  How bad would it have to get for you to do the same?  And yet, America offered great promise.

Our boys were probably a little young to understand the displays, so they were getting  a bit restless.  We stopped by the Great Hall for one more picture.  Feel free to add your own caption for Scotty’s expression, as he ruins yet another potential Christmas card picture.  Sigh. 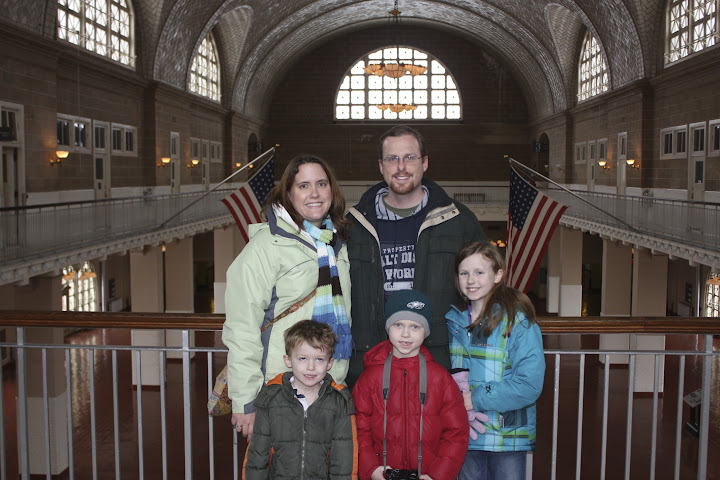 Can anyone explain to me what Scotty is doing here?

Then it was off to the cafeteria for lunch.  Although they offered plenty of tempting options on the menu, New York prices are nearly as bad as Disney World prices.  So, we went with our time-honored tradition of eating PB&J sandwiches in the most famous places in the world.

Scotty decided that wasn’t exotic enough, so he decided to add his own dash of creativity to the meal.  We proudly present Chef Scotty’s latest delicacy: goldfish crackers dipped in ketchup.  Yeah. 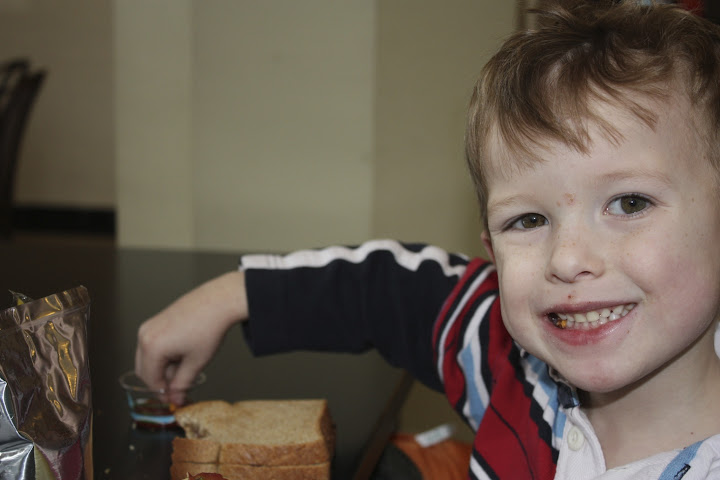 Well, at least he's smiling in this one.

We had one more task.  My mom was hell-bent on looking up her ancestors through the database search system they have at the island.  For $5, you are given time at a computer station to input everything you know about your ancestor, and it will search the ship registries to find him or her, and give you a printout of their entry information.  Mom was ready to dive right in.  She knew her great-grandfather Frederich had sailed over from Frankfurt, Germany.

Never mind that you can do this search at home for free.

Never mind that her last name has been Anglicized, and she didn’t know how her great-grandfather’s given name was spelled, or even what exactly it was.

Never mind that Frankfurt is not a seaport, and is located inland in Germany.

And never mind that she wasn’t even sure if her great-grandfather entered through Ellis Island.  We were going to find this listing! 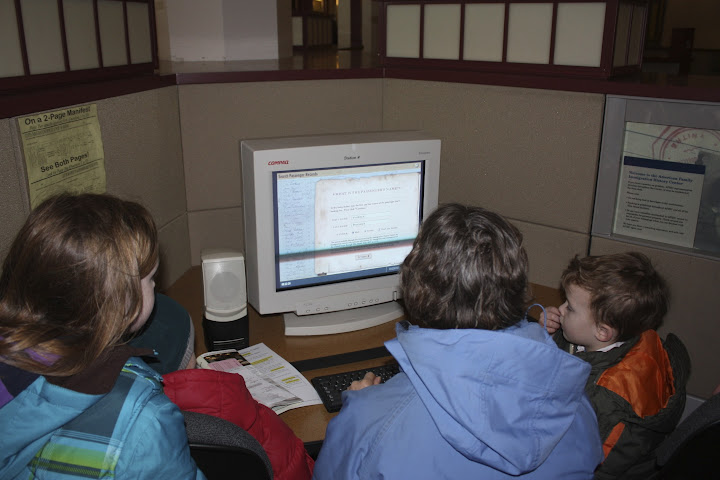 Nope, we can't find the name. But it has a kickin' sound system!

As you can guess, after 10 minutes of fruitless searching, we realized this wasn’t going to happen.  Some clerks tried to help, and they were as nice and patient as could be, but couldn’t turn up any info no matter how many permutations they went through.  Finally, the kids (ok, and  maybe one or two adults) were getting antsy, so we packed it in.

Why were they getting antsy?  Because they wanted to see the Statue of Liberty!  What’s that?  So do you?  Well, allrighty then.

In the next chapter.